when driving, what you see immediately ahead of you is actually not the road; it is the bonnet and this is even more pronounced if you are on a SUV or off-roader which happens to be a lot higher than regular cars. if Land Rover has its way, the hood is no longer what you will see; you will see the ground beneath, including the angle and position of the front wheels, so you will know exactly if there are any obstacles under the front of your ride and where you rubbers are pointing towards. we don’t know about you, but to us, that sounds like a dream come true. this technology, aptly dubbed Transparent Bonnet Virtual Imaging is still at its prototype stage and will be making its way to meet the world at the upcoming New York International Motor Show. so how is this ‘transparent hood’ even possible with the engine, among the many things, in the way? 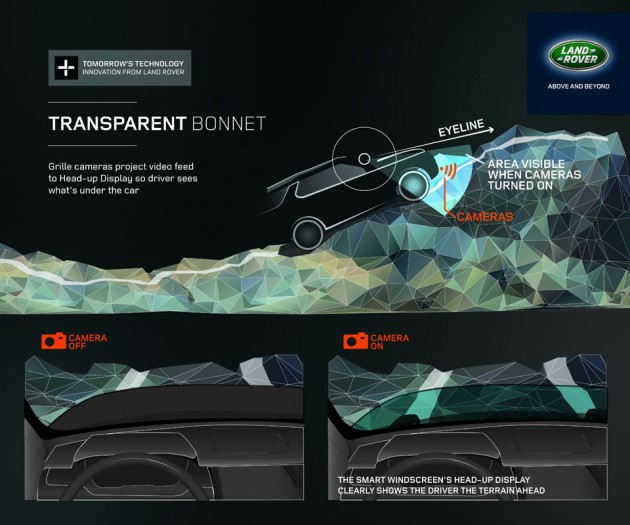 well, actually it is pretty simple in theory: a series of cameras fitted to the vehicle’s front grille captures what you can’t see and feeds them to a projector system on the dash that turns the entire lower half of the windshield into a big-ass head-up display, thereby effectively creating a ‘see-through’ view of the terrain through the hood and engine bay. its benefit may not be as apparent to low-lying, urban-going sedans and sports cars, but for an off-roader like the Defender, it means the ability to see what’s under on a steep climb or when maneuvering in confined spaces. the latter often met with familiar scenario like poking your head out of the window to check where exactly are the front wheels pointing at and therefore with this technology, that could be a thing of the past but on the flip side, it also means that you will have a pretty expensive glass right in front of you, which might give insurance companies the opportunity to drive up the insurance premium due to ‘unusually expensive parts’. in any case, it is still a technological advancement worth getting excited about, don’t you think?