There are guitars and then there’s guitar that can’t be played in a traditional way, like this one cobbled up by NYC-based design firm Stereotank, called Lap Skate Guitar. While it may sounds like it is a skateboard that doubles as an electric axe, it is not. In fact, it wasn’t even upcycled from an old deck; it is built out of a blank skateboard deck, decked out with the requisite electric guitar components like a 1/4-inch output jack, tremolo, an electric guitar bridge, a lone guitar pick up, a volume knob, a lock nut, six tuning pegs and a set of six guitar strings. 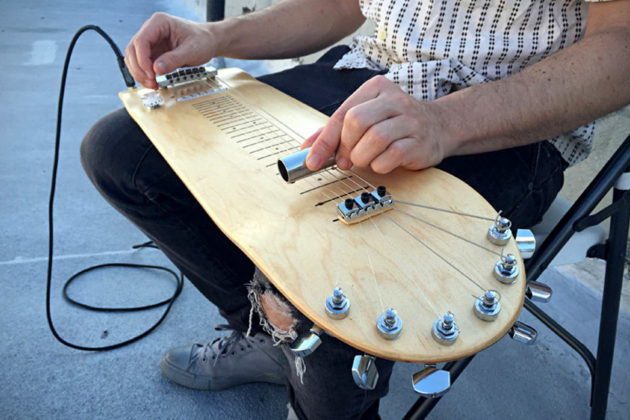 Obviously, this guitar can’t be played in the traditional way. Instead, it has to be placed on a surface, such as your lap when you are seated, and played with a slider, which kind of reminds us of the traditional Chinese instrument, zither. Unfortunately, as mentioned, you can’t expect to be skating to your location of performance with the board, but hey, being a skateboard deck, Lap Skate Guitar is totally easy to transport around. Heck, you can even grab a tiny amp to go with it. Actually, you have to have the amp, cos’ it needed it, but you can the idea.

Also, we are quite sure this isn’t for sale. A good inspiration, nonetheless. Hit the jump to hear some harmonious and mellow sound that this odd-as-heck guitar makes. 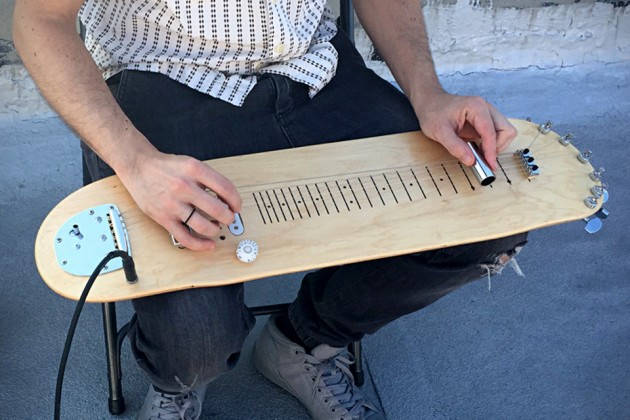