unlike the Sydney Opera House, the Marina Bay Sands in Singapore may not be old enough to be classified as an architecture icon (yet), but it is nevertheless an architectural feat that took three years to realize. else, why would it be featured in National Geographic’s Megastructures documentary? that said, it certainly deserves to be immortalized in the world’s famous bricks – LEGO and it actually did, as part of LEGO Architecture Series – after winning a LEGO online poll, organized earlier this year, for its next Architecture set. as with all other LEGO Architecture Series, the set, which is referred to as 21021 LEGO Architecture Marina Bay Sands, is a small set and therefore it does not quite do justice to the true beauty of the building, though it does however, showcased the building’s trademark Skypark, located at the 57 stories, that links the three individual curved building together.

the vertically curved buildings are the part which, due to the size of the set, could not be truly highlighted. that, along with the ‘missing’ lotus-shaped ancillary building that houses the Art Science Museum, kind of makes the whole set feel less than complete. in any case, it is still worthy of collecting for anyone who’s into LEGO Architecture and has a thing for iconic and beautiful architectures. btw, the LEGO Architecture Marina Bay Sands also marks the first time a Singapore’s landmark has made into LEGO bricks. the LEGO Architecture Marina Bay Sands is available now in Singapore at all Toys R Us stores, LEGO Mono Brand Stores, as well as Marina Bay Sands Hotel gift shop for 89.90 Singapore dollars (about US$72). 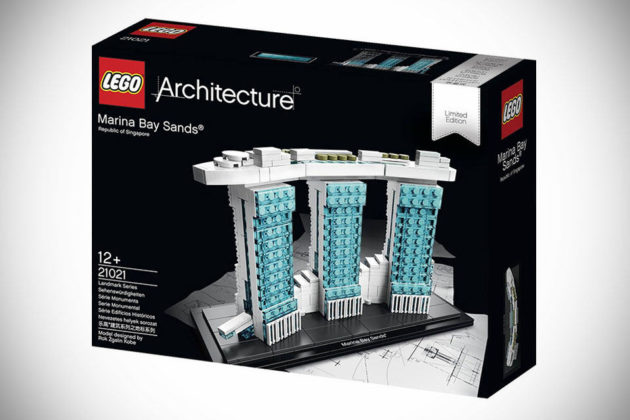