remember The Goonies? we suppose you do and would also have pretty fond memories of it, if not you won’t be reading this. no? anyway for the uninitiated, it was a 1985 action-adventure-comedy flick starring mainly child actors (among them were Corey Feldman, Sean Austin, and Josh Brolin), helmed by Richard Donner with Steven Spielberg being one of the executive producers. the combination of comedic scenes, cheesy lines, and Indiana Jones-like action and adventure signature to the 80s films were all in there, making The Goonies a hit back then (it raked in some $9 million domestically on the opening weekend, surpassing the original Indiana Jones). the funny thing is, we didn’t think it to be as cult or iconic as Back To The Future, or Indiana Jones franchise to warrant a LEGO set. however, LEGO Cuusoo member Lyonsblood begs to differ and hope to let adults and kids alike a chance to relive the adventure of Mikey, Chunk, Data, Mouth, Andy and Sloth, collectively known as The Goonies, with this LEGO The Goonies 30th Anniversary Set.

Lyonsblood is proposing two sets based on two most memorable scenes from the movie: Skeleton Scare and Fratelli Fracas. naturally, each set would come with a set of minifigs unique to each set. being on LEGO Cuusoo means the LEGO The Goonies 30th Anniversary Set has a shot of making to the production line, but it will need a bit of help (in the form of votes) from the people like you and me. it will need to garner at least 10,000 supporters (i.e votes) in order to get to LEGO Review. so head on down to LEGO The Goonies 30th Anniversary Set on LEGO Cuusoo to show your support if you want to see this awesome set on the shelves for its 30th anniversary in 2015. it’s a long shot, but still, we think it will be fun. if you need a little refresher of The Goonies, check out the official trailer in the embedded video below. but be warned, it is kind of slow even for a trailer but kind of know this is typical of 80s movies, don’t we? 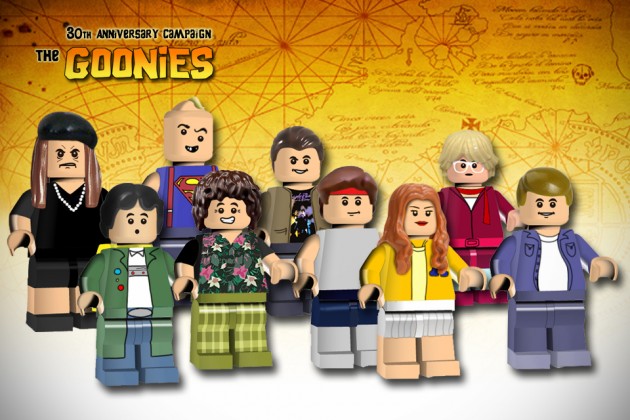