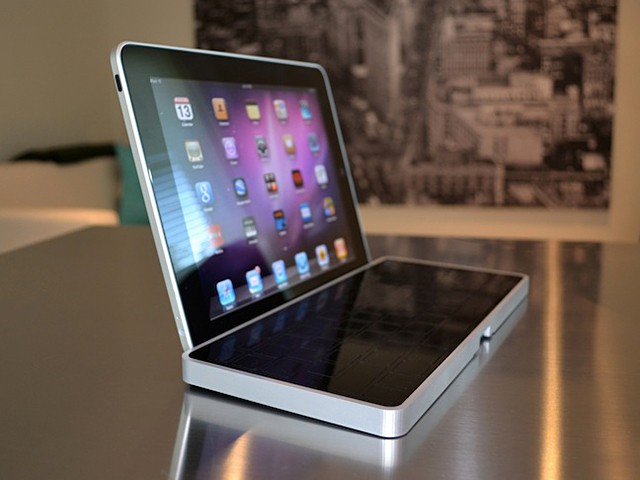 still scouting around for a Bluetooth keyboard to complement you high-tech iPad? then you really got to check out Levitatr, a Bluetooth keyboard that hides the keys when not in use but pops right out at a touch of a button and ready to use. constructed from a combination of aluminum and polycarbonate materials, the Levitatr also features a nifty aluminum kickstand, when deployed, offers support for your tablet device with an angle between 20 to 30 degrees. apart from the kickstand, the Levitatr is just another Bluetooth keyboard but with a huge cool factor. however, the keyboard does suffer a little bulk up in the thickness department (12.5-mm, to be exact) due to the mechanism required to give the keys a swift actuation and response. hopefully, its stylishly cool factor will enable it to outshine its slight shortcoming as far as Bluetooth keyboards are concerned.
[ad#Google Adsense-text-468×60]

the brain behind this cool keyboard is James Stumpf and he needs your help to make this awesome product a reality. if you want to be one of the first to receive the Levitatr, then head-on Levitatr’s Kickstarter to make your pledge. a pledge of $79 will land you with a retail model unit which is expected to have an eventual MSRP of $99. of course, there’s nothing to stop you from pledging more which would get you special edition Levitatr or more than one Levitatr keyboards. oh, James is considerate enough to add AZERTY and QWERTZ layouts options for those who make higher pledge. head on to Levitatr’s Kickstarter page to find out more. in the meantime, check out a few more images and a short intro video of the Levitatr Wireless Keyboard with Elevating Keys after the break.

NOW READ  Cycop SWIFT 2.0 Backpack Is Sleek, Functional And Has A ’S’ Opening For Unhindered Access