LG describes its new flagship OLED 4K TV, W7, “razor-thin” and they are probably right ‘cause a mere 2.57 mm (that’s 0.101-inch!) profile on a 65-inch behemoth, its edge would equate to a razor’s edge. Seriously, that’s absolutely mind-blowing, more so when you know that its thinner than your iPhone 7. When mounted on the wall with magnetic brackets, which leaves no gap between the TV and the wall, it creates an even more picturesque sight. This TV is sure to make your graduation photo on the wall looks like some clunky box stuck on the wall. Crazy. 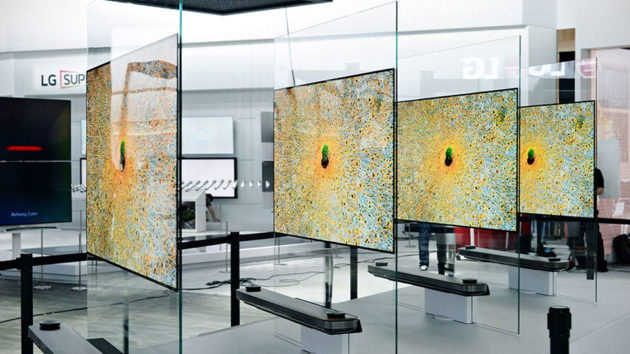 But it does have to make sacrifices to achieve this ridiculous thinness. Firstly, it has only placement option; the wall has to have the TV’s back which means wall-mount is the only way to go. No other way. Secondly, ports have to be located “off-site” and outside of the TV set. However, I think LG pulled this off nicely. Instead of a clunky box which some of the earlier flatscreen TVs (early plasma, if you recall) spot, W series comes with a sleek sound bar that connects to the TV via a flat ribbon cable to create a sense of nothingness, or to be as discreet as possible. 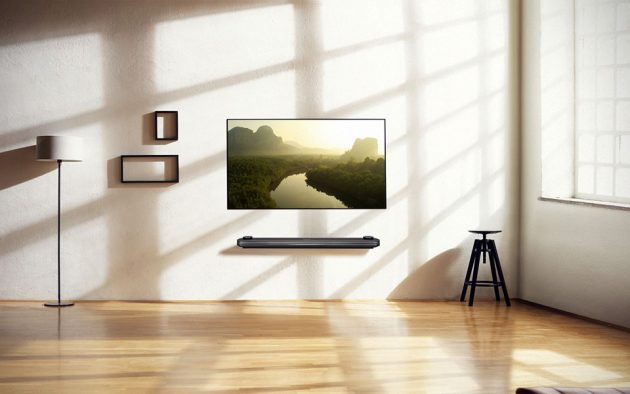 The sound bar is also where you will find a quad of HDMI ports, along with three USB connections as well as an optical audio port. W is also the first TV in the world to boast Dolby Atmos and it is also fully behind Dolby Vision, Active HDR (HDR10), Hybrid Log Gamma (HLG) and is, according to LG, “ready to support Advanced HDR by Technicolor technology” – the same color motion picture technology used by most of Hollywood blockbusters.

Despite its 65-inch stature, new advanced display technology has allow the W7 to keep its weigh down; in fact, it weighs a mere 18 lbs (8 kilograms) which makes it legitimately light than majority of the 32-inch LCDs. Light weight is a necessity, not a luxury, for the W series as it must be able to be mounted on any wall since it can’t possibly stand on its own. Even if it could, you wouldn’t want to risk it. I don’t even want to imagine the devastation if your pet or kid topples this thing.

Unlike many cool products at CES, the LG Signature OLED TV W (which also comes in 77-inch) is a real product, ready to ship sometime in March. If you are keen, do watch out for the pre-order window in the next week or so. As for pricing, it is not disclosed, but as always, be prepared to pay premium for this new toy. Judging from the past pricing strategy for such products, we’d say it will be in the region of 10 grand, maybe? Something like that.

All images courtesy of LG Electronics.