as much as we love reminiscing about toys of the bygone era like M.A.S.K., He-man and even Barbie and Ken to some extend, it is always good to know that today’s toy designers are willing to take bold steps and steer away from the macho and the cute. if Nickolay can score with an average beauty Barbie doll, then we can’t see why My Little Pony can’t deal with a twist too. obviously, toy giant Hasbro, being like the IBM of the 70s-80s with a straight-faced image consisting of mainly black suit and tie, will not be turning out toys that are ‘un-cute’, and that leaves independent toy design studios like Bigshot Toyworks to take on the task to un-cute things. we see Little Maddie as Bigshot Toyworks’ effort to ‘un-cute’ things and in the process, it has created a character that is cute in an entirely different way. definitely not the sort that beckons you to hug it, but one that you can’t help but to take a second or third look. in another words, it might be a cult collectible in the making. 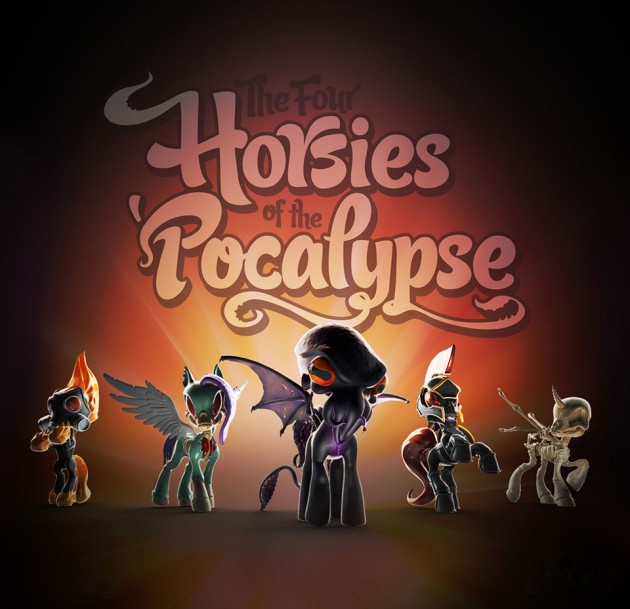 so what exactly is the Little Maddie? Little Maddie here is a My Little Pony-like character, but instead of rainbow wings and lock of hair for the mane, is the Davy Jones of the fantasy ponies world, sporting bat-like wings on its back, an octopus head complete with tentacles and more tentacles for the tail. it is not as gruesome as it sounds – in fact we think it looks pretty awesome cute. you know. not the cute, cute kind of cute? anyway, Bigshot Toyworks has expanded Little Maddie universe into The Four Horsies Of The Pocalypse, but first, it has tasked Tenacious Toys to manage a crowdfunding campaign over at Kickstarter to take Little Maddie off the ground and if all goes well, the rest of the pony gang will eventually be produced. you can show your love by making any amount of pledge in return for attractive rewards, or you could just drop 60 bucks and dive straight for the 6-inch Little Maddie Figure. there is also special Kickstarter-exclusive Green glow-in-the-dark going for $160 a pop. check out a very Hasbro-like pitch video after the break to learn more.