MacBook users have enjoyed the benefits of MagSafe connector which allows for swift connection without fumbling and also, the magnetic connector ensures the cable won’t break or your device won’t get pulled along with you when you forgot to disconnect it. Won’t it be nice if such benefits were to be made available to things like, say, headphones? I mean, we will definitely love the convenience and to end the prospect of accidental diving devices because we failed to disconnect the cable before standing up and moving away. While the industry won’t be implementing such connivence anytime soon, two dudes, Jon Hallsten and Jeff Russell, decided to take things into their own hands. They have invented MAGZET that performs the same as the MagSafe connector, but for audio cables – specifically for headphones. 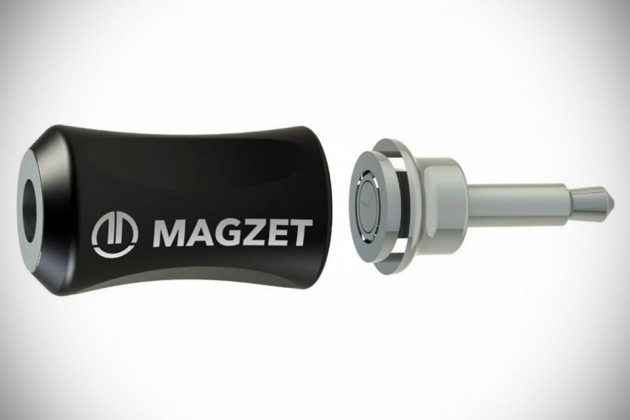 MAGZET consists of two parts: MagJack that fits the jack of your headphones and the MagKap, which plugs into the audio port on your devices. The setup is designed to play well with any standard 3.5mm audio jack and allows MAGZET-equipped headphones to magnetically connects to your smartphone, tablet, laptop or whatever source that has an audio output jack. One MagJack can work with as multiple MagKap, which means you can swiftly switch from devices to devices in seconds. The most ingenious part is, the MagKap will remain inactive until it is magnetically coupled with a MagJack. This means, you can have however many MagKap plugged into the various devices and they won’t be redirecting the audio to the jack until they are hooked up with MagJack.

Of course, the main benefit of such connector is when if there were to have any sudden movement, the magnetic connector will disconnect promptly, thus saving your beloved gadgets from plunging to their possible demise. Another side benefit is that it could save your audio jacks from wear and tear, which could lead to premature breakage since you won’t be plugging and unplugging as many times, or even none at all. MAGZET sure sounds like a brilliant device-saving accessory, but we can’t help to wonder if magnetized connector will affect the quality of the audio? In this respect, its creators claimed that audio quality is “superb”, but we won’t know for sure. For now, we will just take the folks’ words for it.

MAGZET is currently a Kickstarter campaign with a somewhat lofty goal of $294,000, but it has around 30 odd days to go and have since roped in over 1,400 backers, racking up more than 70K in funding. The campaign sure has potential. That said, if you want to be part of the factor that makes this product a reality, you can do so by backing the project up. A pledge of $35 will land you with a MAGZET kit for two devices. That’s, of course, if the campaign reaches or surpasses its set funding goal. Check out the pitch video below to learn more.