Tech innovation is hardly something you will associate with fast food chain, McDonald’s, but every once in a while, it happens, like for example for this year’s St. Patrick’s Day, McDonald’s has came out with a new minty shake called Chocolate Shamrock Shake. Why, of course, it is shamrock! But no, the innovation isn’t in this cold, sludgy beverage; it is in the straw. That’s right. The Straw. I know right? Just when you thought this sucking tube needs no further innovation, it had one and it had a fancy name too, called Suction Tube for Reverse Axial Withdrawal which, not surprisingly, arrived to the acronym STRAW. Ingenious? Maybe. 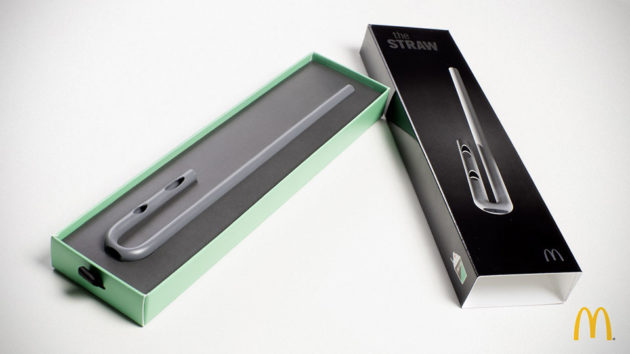 Anyways, back to the Chocolate Shamrock Shake for a moment. This beverage is essentially the minty shamrock mashed up with chocolate milk shake, 50% percent of each, resulting in a dual-layered drink which conventional straw won’t allow you to enjoy both flavors in one suck. Well, at least you can’t unless it melts or your shake it up seriously. So, to counter this unconventional ‘problem’, McDonald’s turned to a group of aerospace engineers to design a snorkel-like J-shaped straw that has additional holes that would allow you to consume both layers with every suck.

It is a bit of stretch to do this and no doubt a costly marketing stun in the name of a seasonal drink, but hey, it is fun and quirky, and we definitely have fun writing about it. McDonald’s even had a special event to unveil The Straw which the fast food chain live streamed over Facebook on February 16. While the icy beverage is available in all McDonald’s, The Straw is not. 2,000 pieces were allotted as giveaway to fans on Facebook and in select locations across the U.S.

Unfortunately, we are a little late on this. The availability was on February 24, but if you happen to be in around Pennsylvania, specifically Danville, you maybe able to get one on March 1. Keep going to catch a very Apple-like The Straw promo video.