If you don’t already know, April 26 (4/26) was the designated “Alien Day” and this day wasn’t choose by the virtue of the planet number LV-426 featured in the first two Aliens movies. “Alien Day” is certainly not as huge of thing as Back to the Future or Star Wars day, but it certainly has its fair share of following that’s enough for businesses to “to something about it.” We have saw Reebok releasing Ellen Ripley’s kicks as worn in the movie that caused quite a bit of furore and unbeknownst to us, there’s a release of the Aliens movie soundtrack on vinyl by Mondo. 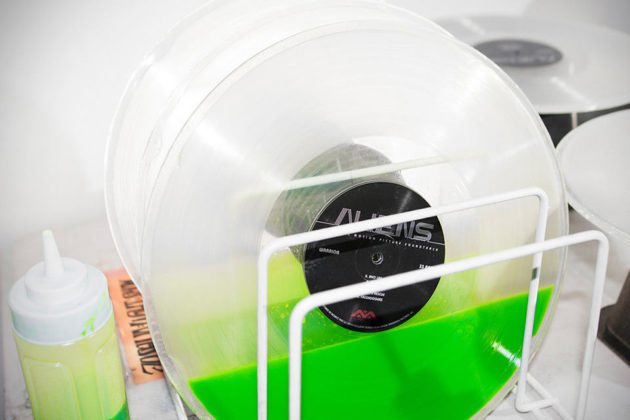 And mind you, the record is not just any record; Mondo teamed up with artist Curtis Godino to create an unique record that’s not only transparent, but also filled with strangely mesmerizing yellow/green fluid as a nod to the gooey, corrosive blood (i.e. xenomorph blood) of the space creatures. The record, aptly dubbed Aliens Liquid-filled Xenomorph Blood Record, is reportedly limited to 75 copies and as you might have guessed, all of them were spoken for.

Man, what are the businesses thinking? Only 75 copies? Aliens may have less following than some other movies, but 75 is hardly a good justification, isn’t it? Anywho, if you missed it, fret not ‘cause there is a bunch of other Aliens-themed merchandize available, including stuff like tees, ski mask (no prize for guessing what’s the ski mask face design), pins and posters. Go sniff them out if you are huge Aliens nut. Check out the fluid flow in the Instagram video below.

Images by Mondo and Curtis Godino.