Marvel’s movie event of the year, Avengers: Infinity War has finally hit the theaters, but the merchandises are not showing any sign of slowing down. At least not for Hong Kong toy maker, Hot Toys. We just received words that two more collectibles have popped up: an Infinity War Hulkbuster and an Infinity War Iron Spider – both which are 1/6th scale collectible figures. And then we read that there was something intriguing floating around the Asian market, a Hot Toys Cosbaby Infinity Gauntlet. That is, btw, a wearable plush toy version of Thanos’ space glove. Cute. 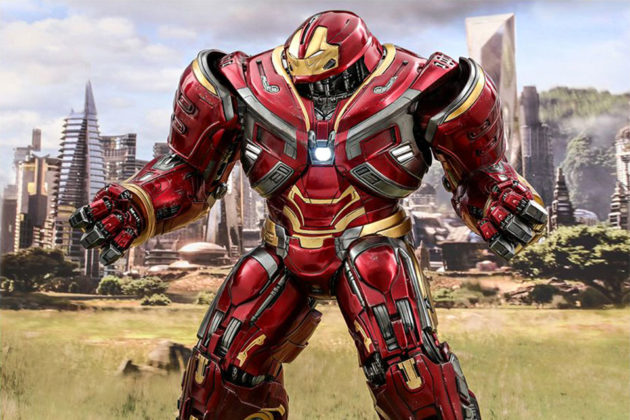 The Hot Toys Infinity War Hulkbuster 1/6th scale collectible figure is the one to look out for if you are into giant machines. Given the sheer size of this Iron Man’s huge-ass exo suit, this scale down version is massive even at 1/6th scale. Coming in at around half a meter (19.69 inches or 1 foot and 7.68 inches!) tall, this posable collectible is sure to impress. Granted, with 6-point of articulations, it does not has as many articulations as most figures and it has just two pairs of interchangeable hands, but really, who cares, right? I mean, just look at the size there. It is massive! 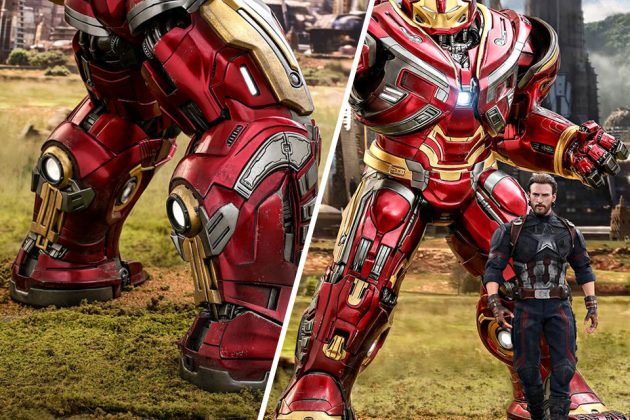 This screen-authentic vinyl-made collectible figure comes dressed in Tony Stark/Iron Man’s signature Hot Rod red and gold colorway, but now with accents of silver with appropriate weathering to boot. Plus, it has no less than 18 LED light-up elements which can be found in the eyes, arc reactor on chest, repulsor palms, back, and legs. With a great size it does come with a huge price. 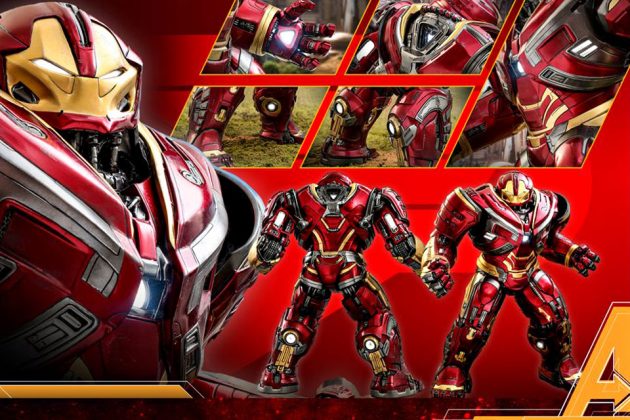 The Hot Toys Infinity War Hulkbuster 1/6th scale collectible figure retails for a cool $430. It can be pre-order now from Sideshow Collectibles. But it won’t ship until Q2-Q3 2019, which should be in time for Infinity War Part 2. Just saying… Seriously, I never get it why the wait. Don’t they already prepare this way in advance? Anyways, moving on… 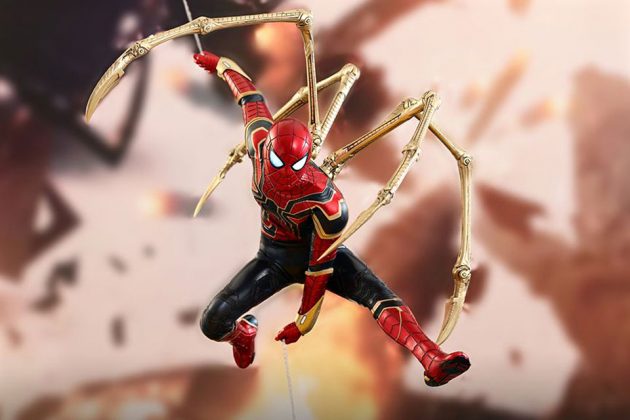 For reasons, Spider-Man might just be the star of the show. It is because of Sony? I don’t know. Even in the “official Marvel game,” Marvel Future Fight, it is one of the earmarked characters to getting new upgrades and uniform. Anywho, if you are Spider fan, the Hot Toys Infinity War Iron Spider 1/6th scale collectible figure should appeal. Oh, nothing much. It is just your friendly neighborhood Spider-Man in a swanky, futuristic suit designed by a genius, billionaire, playboy philanthropist, AKA Tony Stark (in the Marvel Cinematic Universe, that is). 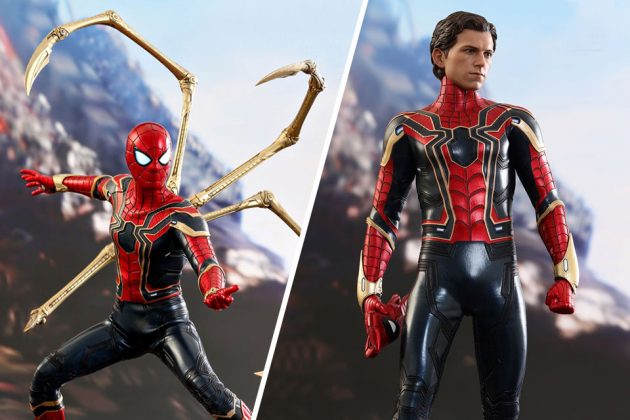 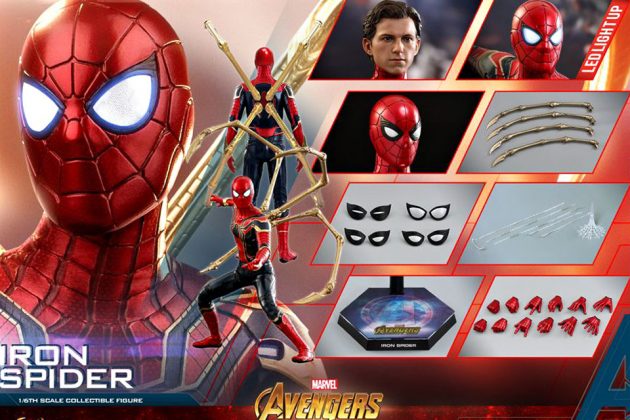 Hot Toys Infinity War Iron Spider 1/6th scale collectible figure is expected to hit the shelves sometime in Q1-Q2 2019, but if you want secure a unit, you can pre-order it from retailers, including Sideshow Collectibles, for around $260.


Unbeknownst to the world outside of Asia, specifically Hong Kong, Japan and Singapore, Hot Toys have been selling a plush version of the infamous Infinity Gauntlet under its Cosbaby line. Yep. Hot Toys Cosbaby Infinity Gauntlet Plush is a thing. It is not listed anywhere though. It is not on its website, neither was it mentioned on the company’s Weibo or Facebook page, but it was something you can buy if you are in Hong Kong, Japan or Singapore.
NOW READ  Mattel Marks 50 Years Of UNO With Classy UNO 50th Anniversary Premium Card Set

Our source said they have spotted Hot Toys selling it at some roadshows in the said countries. It is described as “well-made, and even has a “plush-handle” on the inside” for the wearer to hold on securely. We also heard it was flying off the shelves and why not? It was selling for just 24.90 Singapore dollars (approximately US$19), but apparently, it was a tad pricer in Hong Kong and Japan where it was selling for 238 HKD and 3,500 Yen, respectively (about US$30 and US$32).

We are not affiliated to any toy company, but this what we are going to do. We are going to send our troopers out into the wild and hunt down one or maybe couple and if we do managed to find it, we will do a give away here. No promise, though. We will try our best.

Since we are talking about Hong Kong, you may be interested to know that there is a Hot Toys @ Asia Exclusive: Avengers: Infinity War Exhibition” going on in Hong Kong and around Asia. Like the previous major event by Hot Toys, the highlight will include life-size diorama featuring life-size statues of the superheroes and the star super villains, the Mad Titan, Thanos. Fans will also get a chance to see the latest authentic Avengers costume from the movie Avengers: Infinity War and oh, the galaxy most feared glove is there too, it all its life-size glory. 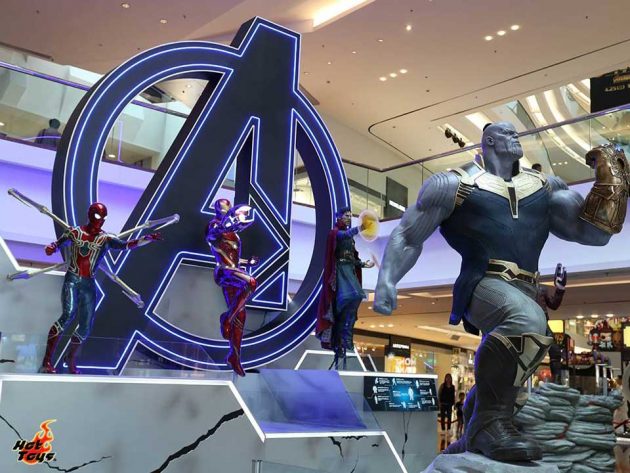 Here are the details of the exhibition:

In a related news, Hot Toys Infinity War 1/6th scale Black Widow collectible figure has gotten its final product and the figure is first available to the Japan market from Avengers Exclusive Store from April 23 to May 27, 2018. Here’s the official description:

You can see more photos HERE.

All images by Hot Toys unless otherwise stated.