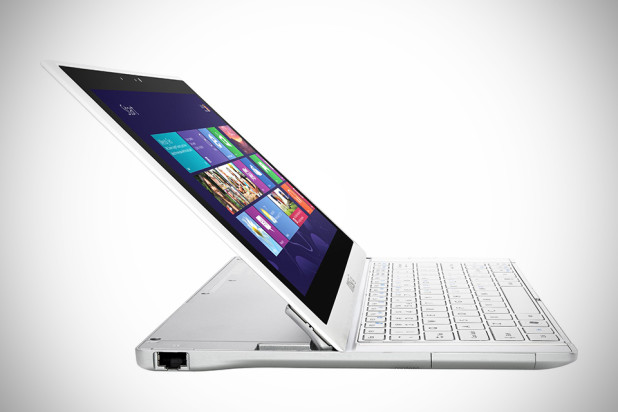 for Windows users who are still deliberating between a tablet and a laptop, we guess that momentous decision isn’t really quite hard to make – especially not when a hybrid or convertible is starting to be a commonplace in Windows 8 portables. one such example is the MSI Slidebook S20 Ultrabook. despite its namesake, it is actually both a touchscreen tablet and feather weight ultrabook. powered by 1.7GHz Intel Core i5 Ivy Bridge processor, the S20 display is of a 11.6-inch 1080p high definition LED backlit display with 10-point multitouch IPS panel that boasts over 350 lumens of brightness. other noteworthy features include 4GB of RAM (upgradeable up to 8GB), integrated Intel HD4000 graphics, up to 128GB mSATA SSD with an additional space for a 2.5-inch HDD if more storage is required, HD front-facing camera, high-fidelity speakers with THX TruStudio Pro sound, a 3-cell, 3,800 mAh battery, and the usual WiFi and Bluetooth connectivity, plus a bunch of I/Os including a card reader, mini HDMI, USB 3.0 ports, Bluetooth 4.0 technology, Ethernet port, WiFi and audio output jack. and oh, it has accelerometer built-in too. all told, the MSI Slidebook S20 Ultrabook weighs in at just 1.16kg (with SSD) (2.6 pounds). its $1,099 sticker might put it on the high side for a Windows laptop but technically, you are actually paying one price for two devices. it is definitely not a tablet per say but with its ability to ‘transform’ into a slate-like device (by sliding the keyboard away), it definitely has an edge when you need a quick use while on the road.