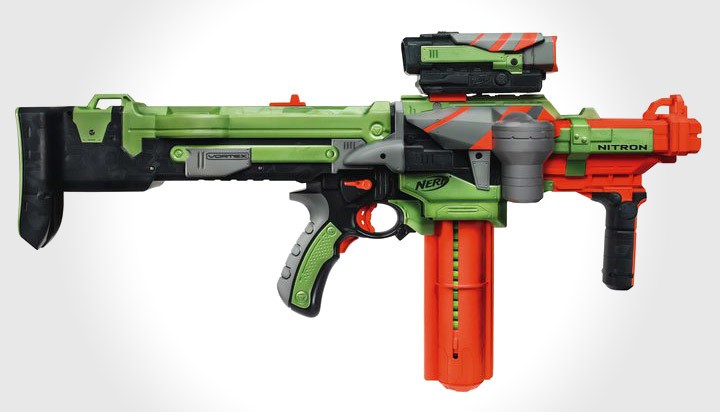 move over foam darts, cos’ blasting your enemy with disc is the latest game in town. meet the NERF VORTEX NITRO Blaster, the latest addition to NERF’s toy gun line that is capable of sending 20-disc to your target in full-auto mode. coupled with electronic scope, additional onboard magazine storage, and a fully customizable Tactical Rail System, this NERF gun will give you the edge over your backyard enemy. thanks to its high-powered disc-blasting technology, the NERF VORTEX NITRO offers long-range, high-powered disc-blasting technology that is said to give it an incredible range. so just exactly how far this thing will go? to that end, Hasbro did not give any official numbers. however, some reviewers reportedly achieved about 40+ feet or more. with such firepower, it would requires some serious juice in the form of six “C” cell and two “AAA” cell batteries, which are not included in the $44.99 package.
[ad#Google Adsense-text-468×60]