Just a while ago, we saw how Japan’s King Record is keeping the Evangelion burning with a newly put together music video and now, we are seeing a teaser trailer of the new big screen Evangelion, destined to the hit the theaters in 2020. But brace yourself cos’ there is not a lot to take in with this snippet. The 20 something seconds trailer only let us in one character and that is Mari Mikanimi Illustrious, the fourth child and EVA pilot of EVA Unit-08 (ya’ know, the super cool “multiple eye” pink mecha), who debuted in Evangelion: 2.0 You Can (Not) Advance. 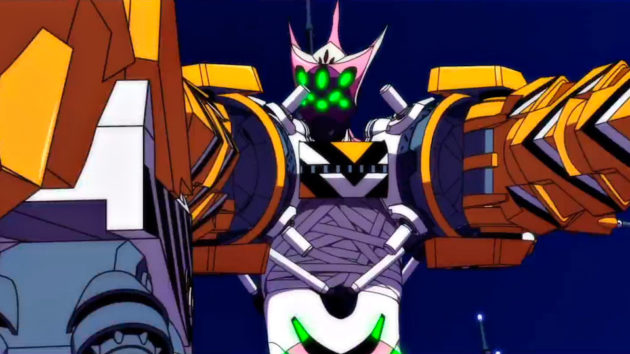 The following is a loosely translated description (read: Google translated):

“Eva is finally complete. Since 2007 I restarted as “Evangelion New Theater Version” series, and released three work “: Introduction”: “Breaking” “: Q”. The latest work, Part 4 “Shin Evangelion Theater Edition” Theatrical release is decided. What is the essence of a person? What does man live for? The theme of Eva has a universal nucleus that is familiar to any age. Shinji, Ray, Asuka, Mari, individual characters riding on Android Evangelion and seeking their way of life. A spectacular world view with a view of human and world revival, precise setting built up to detail and latest images using digital technology appear one after another, expressions with beautiful design, color and emotion are stuck in mind . Speedy and dense, the story that gets addicting once you watch it once again is a distinctive point by Hideaki Anno, a remarkable new masterpiece “Shin · Godzilla” with box office incomes exceeding 8 billion yen. The general manager Anno turns back to the origin of creation in the field of animation and tells the continuation of the sealed story after “Evangelion New Theater Version: 2012” in 2012 with a new concept and mind. From 1995 to the first TV series “Neon Genesis Evangelion” not only anime fans but also social phenomena involving artists and scholars, for the first time in 25 years – in the meantime, “Evangelion” that has always been an epoch making Let’s see a new figure.”

Beyond the brief appearance of Mari Mikanimi Illustrious and her bandaged EVA Unit-08 swirling in the sky, there is really nothing much to see here, but for fans (me included), it is a good start. A glimmer of hope that it is actually arriving, albeit only some two years later.