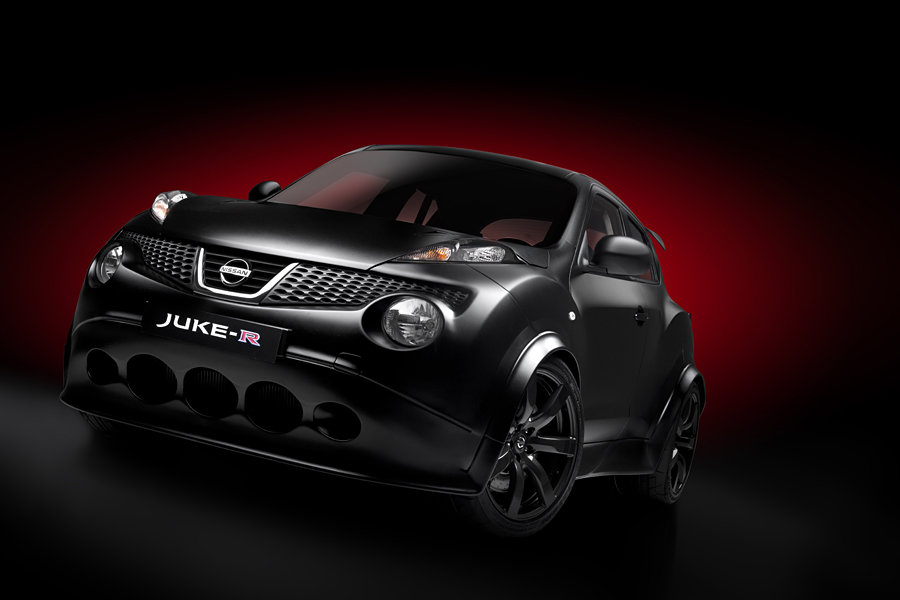 remember the concept Nissan Juke-R that we spoke so passionately about? well… it is ready to rock and roar. Nissan UK has released some official images and videos of this menacing Juke. even though it is an one-off concept and might never see the light of the production, we are still equally thrilled and we have good reason to be: just imagine a Nissan Juke with a heart of a GT-R. need we say more? and it is perhaps the world’s fastest crossover, to say the least. getting a R-badge slapped on it means this fearsome crossover is no pushover. it is equipped with the same 3.8-liter twin-turbo V6 motor that the GT-R has, which translates to having 480 horsepower on the tap and it’s not all grunt that this Juke-R has.
[ad#Google Adsense-text-468×60]

aesthetically, it bears the tell-tale signs that this isn’t your regular Juke. notable enhancements include subtle submerged ducts in the bonnet for drawing the much needed cool air into the engine bay, muscular flared wheel arches cover the GT-R’s 20-inch RAYS forged allow wheels, all-new sculpted skirting, dynamic split rear wing for the added down-force and a twin pentagonal exhausts emit the GT-R engine roar. moving on to the interior, the Juke-R continues to remind the driver that this is not your typical Juke with its motorcycle-inspired console, twin race seats, full race harness, race-spec roll cage, and a slew of GT-R items such as steering wheel, pedals, dials, and a 7-inch touchscreen display. i think we have said enough. race past the jump for a gallery of this one-off beauty and a video to go with it.

NISSAN JUKE-R GETS READY TO IGNITE THE TEST TRACK

NOW READ  Rimac Nevera Is An All-electric Hypercar That Costs A Cool US$2.4 Million

New images and video containing the first official audio of Nissan Juke-R’s beating heart – its 480bhp, 3.8-litre engine – have been released ahead of official testing later this month (November 2011).

Dubbed the world’s fastest crossover, Juke-R is a unique concept car that combines the power, speed and handling of Nissan’s flagship GT-R sports car with the bold, exciting design of the Juke crossover model. Images and video reflect the thought-provoking, energetic style of this urban rebel crossover, while its foreboding matt black finish enhances the car’s rebellious personality.

The car’s unique, impactful styling places Juke’s curves and lines over GT-R’s 3.8-litre engine, drivetrain and suspension, making Juke-R the most testosterone-packed compact crossover in the world. It is a force to be reckoned with not only in performance but also in its bold and menacing design.

Large, provocative vents in the front bumper provide cooling for the Juke-R’s twin turbo V6 engine, while subtle submerged ducts in the bonnet help draw air through the engine bay. Flared wheel arches cover the GT-R’s 20-inch RAYS forged alloy wheels to merge with a new sculpted skirting. At the back of the car a dynamic split rear wing provides the supercar crossover with down-force, while twin pentagonal exhausts emit the GT-R’s evocative engine note.

Inside, the Juke’s motorcycle-inspired console is at the centre of a modified interior cabin fitted out to go racing complete with twin race seats, full race harness and a race-spec roll cage. GT-R steering wheel, pedals, dials and 7-inch touch-screen display are built into a modified version of Juke’s dashboard.

Officially announced by Nissan Europe in October, Juke-R is not a production car but a special, road legal concept car. Two versions of the Juke-R are being created – one in left-hand-drive and one in right-hand-drive. Juke-R will go into testing in late November before it’s unleashed on the world to take on the urban playground.[/toggle]