there are a couple of reasons why we chose to feature the Nokia Universal Portable USB Charger DC-18. firstly, we thought its design is pretty dope; secondly, we seldom come across handset maker who actually design and make a portable charger to complement their handsets. the latter is probably a taboo, like indirectly admitting that their phones need that extra bit of juice. although that’s not necessary true, because this power hungry syndrome is already a common denominator among smartphones of today. though adorned with colorful hues to go with Nokia line of smartphone, the Nokia Universal Portable USB Charger DC-18 is also compatible with all handsets that charges via microUSB. its available 1,720 mAh capacity may not be something to shout about, but for something that measures a small 57mm x 57mm (2.2″ x 2.2″) and weighs in at just 65 grams (about 2.3oz), you can’t really ask for more, can you?

to charge any microUSB powered devices, all you have to pull the cable out to switch on the portable USB charger, plug the microUSB to your device and you all set. and when you are done, just push back the cable to turn off the portable battery. instead going the Apple-ish route like everyone else, the DC-18 is equipped with LED indicators in the form of a battery symbol to let you how much there’s left in the charger when you tuck the cable out. this attention to detail is admirable. really. a perfect companion for handsets such as the recently announced Asha 501. at this point, there are no information with regards to its availability and pricing. in mean time, you can learn more about the Nokia Universal Portable USB Charger DC-18 HERE. 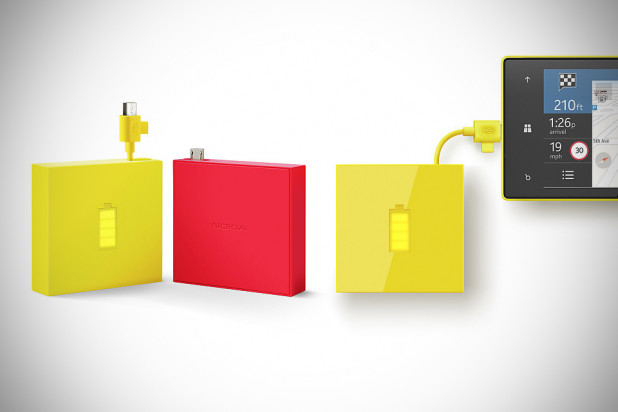