Ah… now we are beginning to see the big picture why OnePlus 5T was announced with just one color options, Midnight Black. It was probably a marketing stunt that will allow the handset maker to turn out ‘limited edition’ color for other markets. Slowly but surely, it has announced a limited Lava Red version exclusively for China market and now, at the Comic Con India, it has announced a white edition that’s Star Wars branded. This limited Star Wars edition is no doubt a celebratory device for the upcoming Star Wars: The Last Jedi movie. 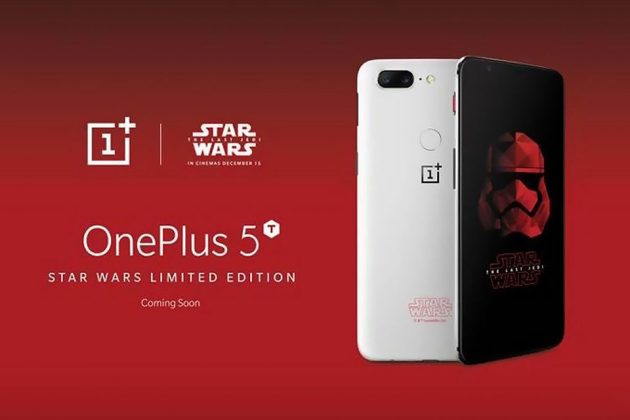 In addition to the customary UI touches that bestow the device with Star Wars flair, the device’s exterior gets a hint of Star Wars involvement with a red outlined Star Wars logo to the bottom, joining the a black outlined OnePlus logo found under the fingerprint sensor. The front, as you probably already noticed, remains the same black. Strangely, OnePlus has opted to keep the buttons in black which kind of awkward, but that’s probably the theme of Stormtrooper going on there. The only saving grace here is, the alert slider is in red. Now, that’s something I really dig. Stark contrast in a comparatively loud contrast color. Sweet.

Beyond those, there’s really nothing much to it. What I see is, you will probably get this device if you want white badly, or like me, wanted an accented alert slider. Other than that, the subtle red logo down at the rear is really easily forgettable. But isn’t that always the case with such collaborations? At this point, there are no words when and where this limited edition OnePlus 5T will be available. But it won’t be long since the movie is slated to hit the theaters on December 15, 2017. So, will you want a white Star Wars branded OnePlus 5T?