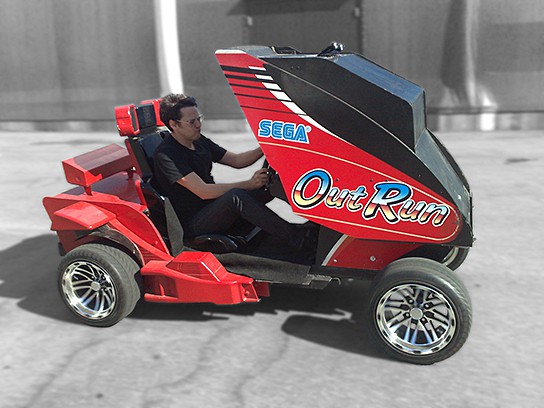 remember the 80’s arcade game, Out Run? well, it has make its comeback, albeit not commercially, to our today’s world. however, evolution has it that it now takes on a real drivable car. simply put, it is an arcade driving game on wheels. developed by researchers from University of California Irvine’s Information and Computer Sciences department, the OutRun arcade car is built on a golf cart and has a couple of cameras mounted up front to capture the forward view, while custom software translates the view into an augmented reality view for the driver.
[ad#Google Adsense-text-468×60]

the view that the driver sees in front of him is in the form of 80s pixelated graphic. thus, staying true to its 80s arcade origin. the driver has only the screen to rely on for forward viewing, save for the occasionally irresistible ‘peering-around-the-corner’ act, which kind of dangerous if you think about it. what the cameras see, the software draws out on the screen and for the example in the video after the break, it reflects the road with trees along its sides in 80s graphic. pretty cool idea but definitely not something you want to drive at speed. come to think about it, what happens if a cat dash across? will we see a pixelated cat crossing the screen as well?