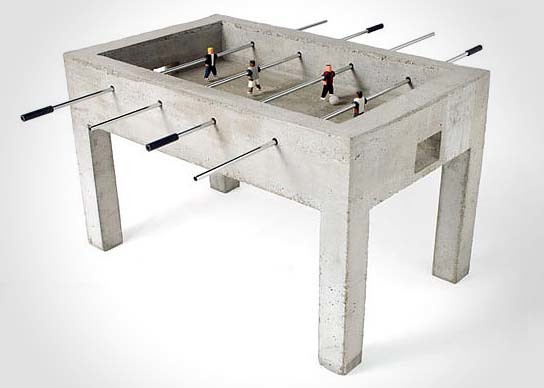 i am not a huge fan of soccer but for some reasons, foosball never fails to attract me. it is unexplainably addictive and i would think, it is a game that will never go out of style. that said, it is only natural that a foosball table cast in concrete that reminisces of a street soccer game has my attention in an instant. instead of the usual wood or MDF board materials, the Panna Foosball Table is cast in concrete and has a 2-a-side set-up.

the fact that it has just four ‘foosballers’ who are ‘dressed’ in casual attire recreates the true spirit of street soccer. originally created by I Have Pop for a Nike exhibition in Amsterdam, the Panna Foosball Table aimed to challenge players to think of new ways to play. as I Have Pop puts it:

[quote style=”boxed”]the game is either played one-on-one or two against two and focus is not only on scoring the most goals, but on showing who is the best. First one who plays a ball in between the legs of the opponent wins.[/quote]

in modern gaming terms, we call it ‘game play experience’. sadly, this work of art is not for sale and you won’t find another piece of this in the world, as it was unfortunately destroyed in an accident while en route to a shop location in Copenhagen, Denmark.

I Have Pop via Trendhunter