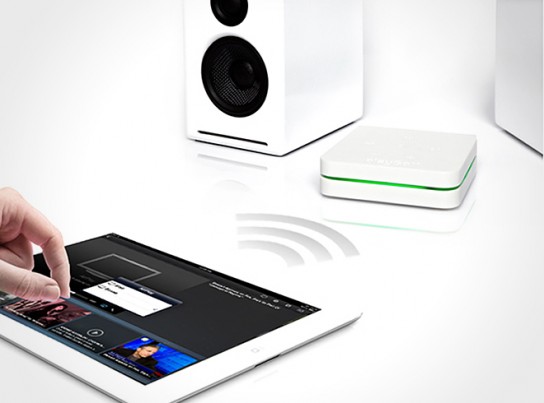 still in the market for an AirPlay-enabled receiver but don’t fancy the bulk that comes with today’s AirPlay-enabled receivers? well, here’s the good news. a Connecticut-based firm, playGo has a nifty solution known as the AP1 AirPlay Receiver. the new AP1 is not to be confused with the USB model (though they look pretty much alike), a product that the company launched last year. first off, it is an AirPlay receiver in its simplest form with minimal setup to get going. all you have to do is to hook up the AP1 with your audio system or powered speakers via the optical or RCA analog connection and you are good to go. like its USB sibling, it bears a close resemblance to the Apple Time Capsule, except for a green ring of light that goes around it. physical control is via the top of the receiver in the form of touch-sensitive engraved ‘buttons’. under the hood is a 32-bit Burr-Brown PCM5102 digital-to-analog converter (DAC) that is capable of processing 24bit/96kHz audio files for some serious HD music playback. apart from AirPlay, the AP1 is also DLNA-certified and works with Microsoft’s new Play To wireless streaming standard. well, if you ask me, anything that can stream without the aid of apps is music to our ears. if you want one, all you have to do is to make a pledge of $199 or more and yes, Bicom (the folks behind playGo) has gone the Kickstarter the route and they are looking to raise $150k for this cute little player.