no. what you see here is not a jet engine, but it is an equivalent monster in the portable audio world. it is the Pyle Street Blaster 1000W Boombox that, as the product name implies, offers a house-shattering 1000W of audio grunt. when was the last time you heard of a portable that gives you anything more than a single digit audio output? a long while, we could imagine and this is the portable audio rig that is going put some serious boom back into mobile partying. heck, it could even be used for your next mini DJ gig. packed into this space age-looking cylindrical housing is a full-range stereo setup that also features built-in digital amplifier, Bluetooth connectivity for wireless audio streaming, as well as NFC for one-touch pairing.

a built-in rechargeable battery provides up to four hours of untethered playback per charge, while a USB port allows you to share its battery power with your smartphone or any USB-powered devices. this 1000W beast also supports streaming from popular apps like Pandora, Spotify and other music applications running on iOS and Android devices. an auxiliary input further adds source versatility, enabling you to connect to iPod, tablets and more. additionally, a microphone input lets you use it as a public address system and it can double as a guitar amp too. unlike small portables, the Blaster offers you control over the treble, bass, echo, volume, microphone and guitar levels, allowing you to fine tune the sound to perfection.

finally, rounding the package is a set of LED lights that blink and pulse to the music, providing an added visual treat and spicing up the party mood. the Pyle Street Blaster 1000W Boombox is ready to the hit street now for $249.99. 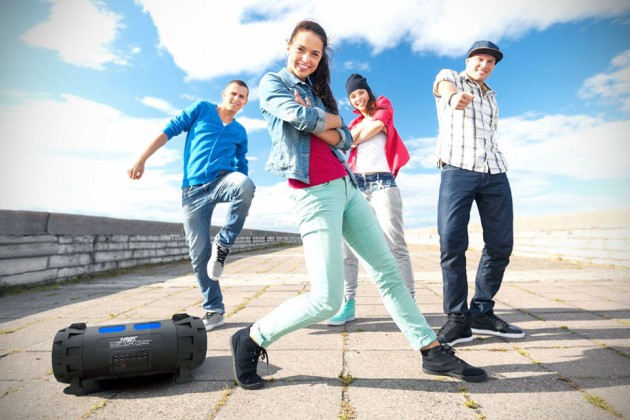