Spain-based German architect Andre Broessel has a big dream. he believe in autonomous consumption off the grid that will eventually contribute to reverse climate change and the Rawlemon is the invention that he is banking on to achieve this dream. so what is a Rawlemon? it is basically a big-ass solar ball lens that directs diffuse sun ray into a photovoltaic panel with far greater efficiency over conventional solar panels. the principals behind spherical geometry and how light behave when passed through them allows the water-filled ball lens to direct even the faintest sun ray, therefore enabling harvesting to continues when cloudy or even at night. there’s another features that makes the Rawlemon further stands out from the rest of the solar devices out in the market: it has special dual axis tracking system that enables the solar ball lens to follow the course of the sun and moon as they travels across the sky. 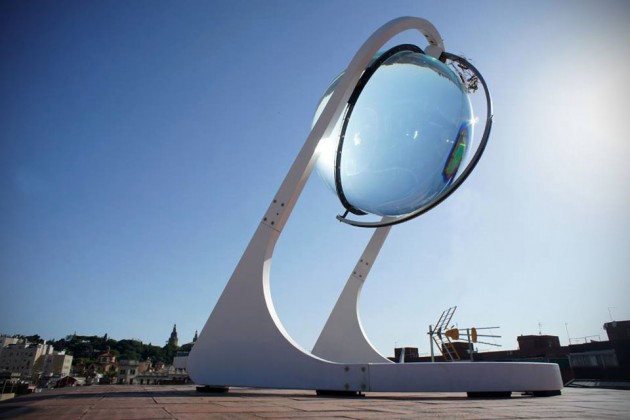 this tracker tilts the panels along with it, savoring every bit of what the sun or in the case of night, the moon, has to offer (converged by the ball lens) and result in up to 70 percent more efficient than typical solar panels. however, before this could be realized, Andre need financial backing to further develop and produce the Rawlemon and this is where Beta.ey Solar Charger comes in. the Beta.ey is essentially a desktop version of the larger-than-human size Rawlemon, featuring the same functionality as the larger counterpart and could be used to juice up your gadgets. each Beta.ey Solar Charger features a solid acrylic-polymer ball lens, a 1.6W multi junction cell, the Rawlemon dual axis tracking, a built-in battery for juice storage, a USB port and two sets of RGB color LED for some added eye candy in the night.

two models are available, one suitable for small USB-powered devices like smartphone and the other, for larger USB-powered devices such as tablets, both which are available through Indiegogo for $149 and $999, respectively. however, if you all in for the beta version of the large scale Rawlemon, they are up for grab starting at $6,000. check out a pitch video of the Rawlemon below to learn more.