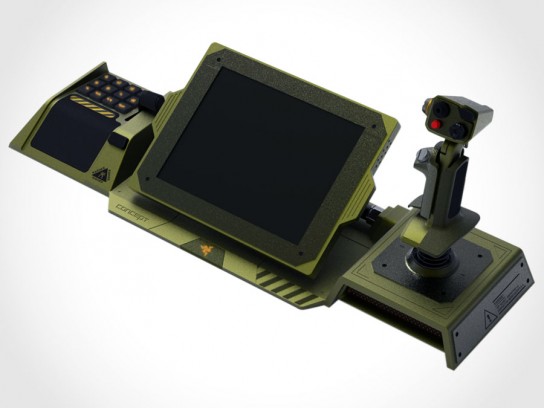 in the late 80s and early 90s, MechWarrior was probably one of the hottest war action game on PC. during its heyday, it has managed to capture the imaginations of many adolescents and teens, and this is the year that it will rise again in the form of MechWarrior Online. whether will it be as hot as the original franchise remains to be seen, however, what we know is, we are already sold by the Razer Artemis Concept Controller, crafted specifically for this soon-to-be-launched game. developed in collaboration with Piranha and Infinite Game Publishing, the Artemis is a controller that replicates the cockpit of the BattleMech and it aims to offer gamers an immersive gaming experience with full-programmable, fine-tuned controls and ergonomically adjustable hardware. features include mechanical key architecture for crisp, tactile feedback and fast actuation, inter-device communication, integrated display that provides critical in-game data and a control stick that reminiscent of an aircraft flight stick, complete with buttons, triggers and built-in force feedback. since the development is, presumably, still in its infancy and thus, technical details remain scant for now but knowing Razer, we have no doubt that we will be seeing this awesome controller hitting the market eventually. hit the jump for a couple of larger images.