AirBnB has completely changed how we get a roof over our heads when traveling. It spurs a handful of peer-to-peer services, including bathroom (yes, even that!) and bicycles. And then now, there’s Ridehunting. Ridehunting is somewhat similar to now defunct Spinlister. I applaud the spirit of the folks behind Ridehunting despite what happened to Spinlister.

The startup picks up where Spinlister left off and as you may have guessed it, it is a peer-to-peer community driven market. But Ridehunting does more than bicycles; if you have a surfboard, snowboard, kayak, skis to lend, Ridehunting is here to provide you the platform to do so. 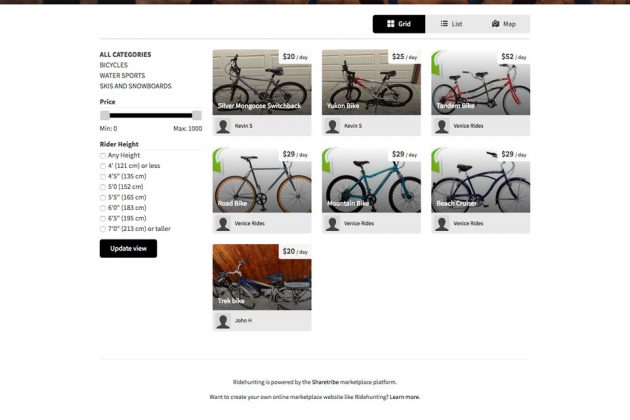 With the proliferation of bike sharing (and sharing of everything else under the sun, including umbrellas, basketballs and even sex dolls), I am not quite sure how this will work out. We wish Ridehunting the best of the luck, nevertheless.

Spinlister did dabbled beyond bikes, btw, although peer-to-peer bike sharing was its core. It also deal in other outdoor sporting gear, including the likes of surfboards, skis, and snowboards. But Ridehunting here wants to be known for all those – not just bicycles.

Like I have said, I am not quite sure how the whole will pan out for this startup. My feel is, these items are not as major as say, accommodation. Even then, accommodation has its competitions, but AirBnB often promotes intangible benefits such as mingling with the locals and close proximity to real culture et cetera, and the obvious tangible selling points like affordable price point, while these sporting gears are hard sell since already, there are bike sharing services going round and sporting equipment like surfboards and whatnot are already covered by rental businesses.

However, peer-to-peer sharing for cars or even garage will see probable success. Anyways, now you know. If you ever need a bike, a surfboard, a snowboard, a kayak, a set of skiing equipment, you know where to get them without buying your own. You can find out more over at Ridehunting’s services over at their website.