While scientists dream of making the world less polluted with electric propulsion, one dude in the 1950s dreamed of using seawater to power boats. His bold dream was featured on Mechanix Illustrated Aug. 1954 issue. Using saltwater and different metals to generate electricity is a theory that has been thrown around for a while now. Over the years, someone from somewhere had mooted the idea (which wasn’t original in the 1950s, btw), but we have yet to see a real life example after Ralph E. McCabe bold experiment. But thanks to YouTuber/Tinkerer Peter Sripol, you can see it for yourself if the theory holds any (salt)water. Sorry for the lousy pun. 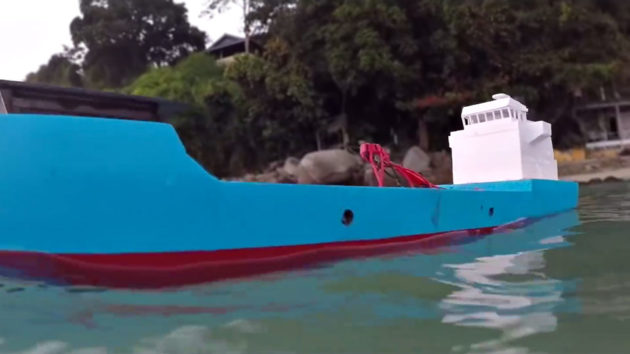 Peter, inspired by an article that proposed the idea of a seawater powered boat, decided to put the theory to test. In the usual fashion of Sripol, he designed and put together a “sea-worthy” model vessel which was rigged with Galvanic cells that drives its single screw. If you watch the video (which is embedded below), you will notice a solar panel was included. Well, don’t be misled by the solar panel. It is only there to supply power to the RC control and servo. In fact, it has to be there because the saltwater battery system is only good enough to drive the both at a snail pace.

It was wholesome experiment though. Perhaps, a flint to rekindle the interest in this alternative power for the sea among commoners like us. Perhaps. Another important lesson we have learnt from Sripol’s video is, he quite a (scale) boat builder. His vessel was tested on open waters and it proved to be able to stand up to rough water conditions. Well, rough as in by the virtue of its small size. I mean, for scale model, a gentle incoming wave will feel like Tsunami.

Continue forth to catch the aforementioned video.