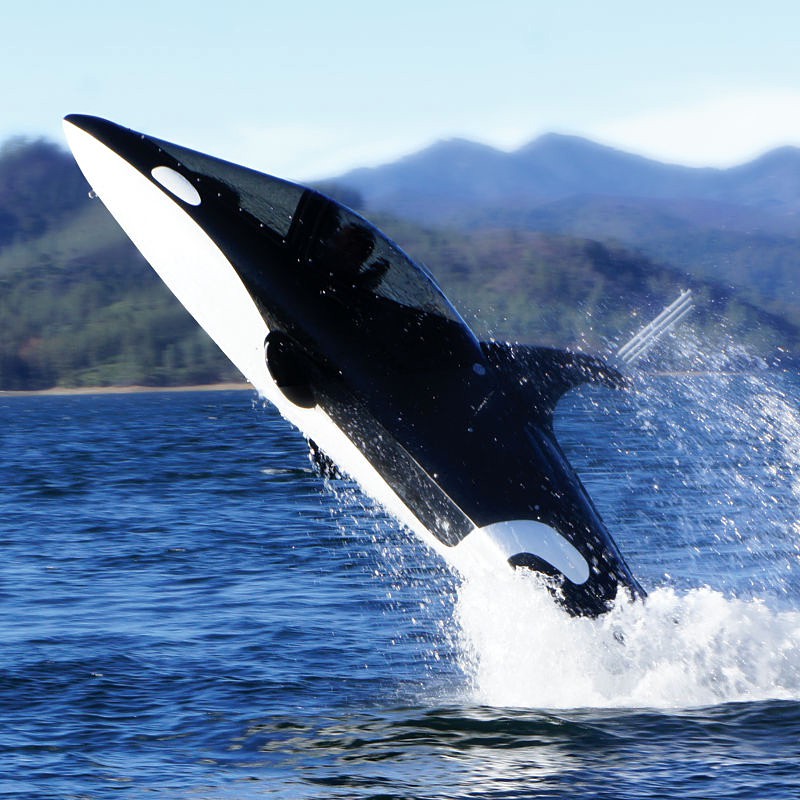 man has long been fascinated by how birds are able to flap their wings to take flight and how the ghost knifefish can cuts through the water so effortlessly. while we can’t actually fly by flapping anything, we can at least dive and roll in the open water like a, er, killer whale. from the maker of the original Dolphin, an enclosed submersible watercraft that is capable of mimicking dolphins’ agility in water, comes the killer whale inspired Seabreacher Y. the Y incorporates several design features that is worthy of its namesake, including a rounded off nose, large whale tail, pectoral fins, a taller dorsal fin, and of course, an unmistakable black and white paint job. this sleek two-person watercraft is equipped with a 255-hp supercharged engine that has enough grunt to allow the pilot to perform realistic orcinus orca behaviors such as breaching, porpoising and skyhopping. when not mugging around with stunts, it can hydroplane up to 50 mph over the water’s surface, or cruise submerged at a top speed of 25 mph. other features include dorsal fin integrated snorkel, and a well equipped cockpit complete with speedometer, tachometer, engine and air pressure gauges, an LCD screen that displays live video feed from the built-in camera on its dorsal fin, vinyl seats with closed-cell foam upholstery, four-point racing harnesses to ensure both its pilot and passenger stays where they are during those exhilarating stunts, and finally, a 1/2-inch thick acrylic panoramic bubble top canopy offers the two-man team a stunting view of all the splashes that are going on. for half the price of a space travel ticket or $100,000 to be exact, the Seabreacher Y Killer Whale could be yours. breach past the jump for a few more look and a video of the Seabreacher Y in action.

NOW READ  This Submarine Has Gull Wings, Is Designed To Dive Deep For Visiting Titanic’s Wreckage