chopped top treatment on regular, full-size car will look kind of luxurious and elegant (mostly), but on a tiny kei-size ride? well, that’s a thin line between awful and awesome. the Skoda CitiJet Concept proves that Skoda, or rather its 16 Skoda Vocational School apprentices, might have gotten the formula spot on and made an otherwise mundane just-another-cute ride into one that could turn heads. in fact, the car looks so spectacularly awesome that we could call it cute without hurting anyone’s man-ego. guided by Skoda’s Head Designer, the students took six months to arrive to the CitiJet Concept you see here and in the process, they have lopped off the roof, removed the rear seats, created a subtle and yet big-ass spoiler, installed a twin downward facing exhaust pipes, shod it with 16-inch alloy wheels and gave it a distinctive blue and white paint job. the result is a ride that even a grown man would love and have no qualms about being called cute. 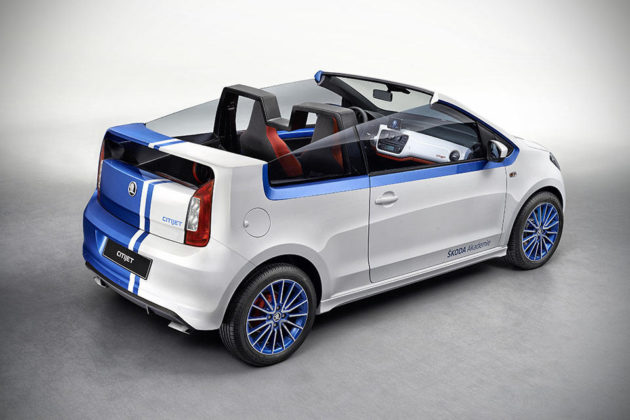 under the hood is a modest 1.0 MPI petrol engine with a less than impressive 75 PS as found on the CitiGo – a further evidence that this car is designed to be seen and not zipping past with insane speed that leaves everybody else wondering what the hell was that. it is a sporty-looking and fun concept, but not necessary sporty in the performance aspect, but i think we can live with that and would even gladly laugh off its double digit century sprint record. the sporty ethos continues into the cabin where you will find a red-stitched leather wrapped three-spoke steering wheel, leather handbrake handle and gear knob, ‘sport’ material seat covers and floor mats, and a white/red theme dashboard. also on the inside is a 300W sound system and a “music-reactive” LED lighting to psyche things up a little, or possibly just to get the adrenalin going.

the Skoda CitiJet Concept will be making its way to join the rest of the VW family like the SEAT Ibiza CUPSTER and the AUDI A3 Clubsport at the Wörthersee event next weekend.