The fact that there is an expo that’s about toilet shouldn’t surprise anyone, but what should surprise is, Bill Gates spoke at this expo called Reinvented Toilet, held last week in Beijing, China. For his speech, the founder of Microsoft used a jar of poop to emphasize the importance of sanitation, specifically off-the-grid sanitization which many poorer countries lack.

Pointing to the beaker of human feces, Gates educate the audience that this small amount of human waste could contain as many as “200 billion rotavirus particles, 20 billion Shigella bacteria, and 100,000 parasitic worm eggs” which, along with other pathogens, “causes diseases like diarrhea, cholera, and typhoid that kill nearly 500,000 children under the age of five every year.” 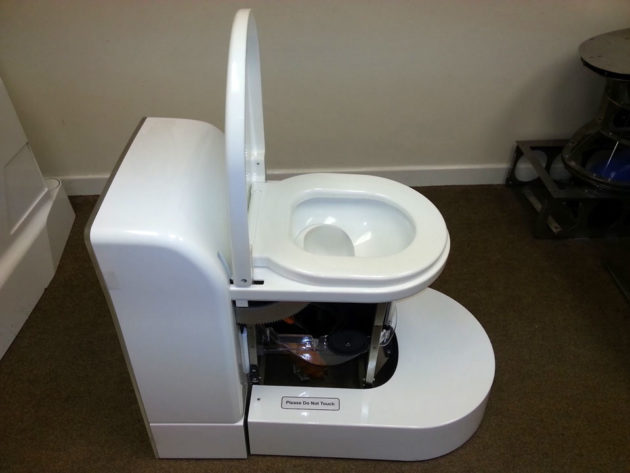 What Gates have in mind is, the deaths could be prevented with proper sanitation and proper sanitation is what this Bill & Melinda Gates Foundation-backed invention by Cranfield University is about. Called Nano Membrane Toilet, this ingenious toilet uses a unique rotating mechanism to treat both liquid and solid human waste without the need for water or electricity, and doing so be curbing odor and keeping the waste out of view.

This video here perfectly explains how this system works:

The solid waste will be turned into ash, allowing it to be use as fertilizer or dispose as regular waste, without the risks of dangerous pathogens. As for the treated liquid waste, it becomes water, stored inside a reservoir inside the step of the toilet, which can then be use for washing or irrigation.

Reinvented Toilet Expo is the brainchild of Bill and Melinda Gates Foundation which showcased twenty toilet designs developed by companies from around the world. Gates Foundation have invested over the last seven years, working with parents to develop a new generation of non-sewered sanitization technologies.

In addition, the Foundation have committed another $200 million for further R&D in order to “bring down the costs of new products for the poor, and to support market development in regions where new, non-sewered sanitation solutions can have the greatest impact.”