apart from flying cars, traveling on a single-wheel contraption is probably the next most dream about transportation, albeit being way less ambitious. while flying cars may take quite a while to fruition, electric single-wheeler is not a dream anymore – if you have that kind of money to throw. and the money we are talking about is something like $2,700. The Self-Balancing Electric Unicycle aka EcoBoomer iGO is one such unicycle you can buy today. powered by a 500-watt electric motor that’s capable of ferrying a person weighing 250 pounds (115 kilograms) or less, it affords the rider up to two hours (or a range of 19 miles) of 13 mph (21 km/h) thrill and takes up to three hours to fully recharge its built-in lithium-ion battery. 13 mph may sounds like child’s play, but with just one wheel, we wouldn’t want to go any faster.

also within its ABS body are gyroscopic sensors that detects the slightest movement, thereby allowing you to maneuver the machine the way you would with a Segway i.e. leaning forward for acceleration and leaning backward to slow and eventually stops the vehicle. the gyros also help to prevent a head-to-pavement disaster from happening, but that’s as far as the gyros would do which means side-to-side balance is still the manual job of the rider. the iGO weighs in at 57 pounds (or about 26 kilograms) and has a compact stature measuring just 25″ x 12″ x 23″ (64 x 30 x 58 cm), thus allowing you to stow it in the trunk of your car. and judging from the photo below, it looks like it can even fit into a Smart car. see the Self-Balancing Electric Unicycle in action in the embedded video further below. 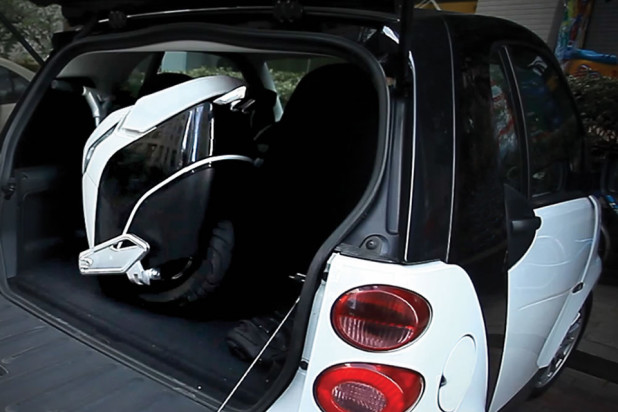 PS: we wonder why the rider did not put her feet fully on the folding feet pads? a lack of confidence, perhaps?