Electric skateboard is a dime a dozen today. There are so many manufacturers out there today that consumers are basically spoilt for choice. Hell, you can even cobble one together with a drill if you really want one on the budget. In other words, there aren’t really any breakthrough in electric skateboard development. I mean, a deck, four wheels with a motor or two can hardly be ‘breakthrough’, really. Sadly, skateboard isn’t spared from the monkey see, money do syndrome. The best you get are, oversized wheels for off-road skateboarding, but alas, the concept remains pretty much the same. But the Ungoverned Drifter you see here is a whole new ball game.

It totally broke the convention and notion of skateboard. Now, you probably heard of two-wheel drive and four-wheel drive, but have you heard of thirty-wheel drive? Well, as ridiculous as it sounds, Drifter is in fact a thirty-wheel drive electric vehicle. Little is known about the technicality at this point. What we do know is, it has over 70 balls that serve as the vehicle’s wheels, of which, an undisclosed powertrain drives over 30 numbers to afford motion. That’s for now and oh, it is patent-pending too. Anywho, future iteration will likely see it having seventy-wheel drive. Yes. Seventy-freaking-wheel-drive! This is just the beginning of a revolution in electric skateboard. 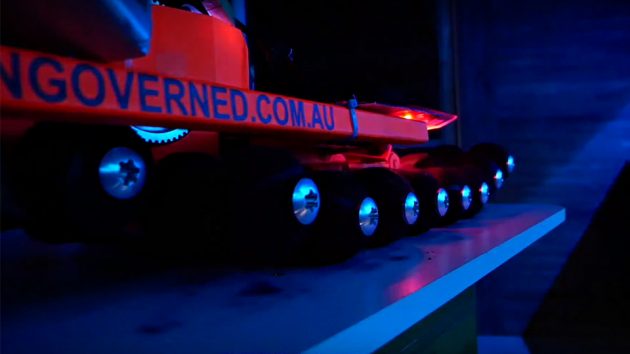 Drifter is not designed with roads on mind, though it certainly can take on mundane flat terrains too. Drifter is primarily an off-road leisure vehicle, an ATV of sort, but it will be a lot more versatile. Future development will see it getting more power that will allow this monster of electric skateboards to make off-road vehicle requisite air time. Yes. Catching air! Sounds like an exhilarating proposition to us. Imagine a seventy-wheeler doing air time. Very futuristic, no doubt. What you see in the video is the very first prototype. It is not going as fast as it should. Moreover, the prototype, which tips the scales at 19.4 kilograms (42.8 lbs!), is predominantly solid steel frame. However, the eventual product is likely to be constructed out of carbon fiber and titanium elements which will definitely slash the weight dramatically without sacrificing robustness.

NOW READ  (VESPA ELETTRICA)RED: Same Electric Vespa But In Rosso Red And For A Good Cause

Even at this current slow speed, we can see the Drifter exhibits huge potential as far as fun goes. I am not going to lie. I want to be on one and I want it now. The fact that it has so many wheels offer comfort no skateboards can provide and instead of ridiculously tall ride height, it hugs the terrain and conform to them which is yet another comforting thought. Pretty dope machine which we hope it will see fruition soon. Yeah. We have no doubt about it becoming a reality because the person behind Drifter, Aussie Dan Baldwin, is also the same guy we conceived Scarpar, the super duper dope tracked skateboard. So, expect the Ungoverned Drifter multi-wheel electric skateboard to be on sale eventually. Anyways, keep going to catch a video of the prototype in action.