the official name for the Victorinox Knife Block with Tablet Stand is actually Cutlery Block 360° Rotating, which we thought don’t quite do the product justice. not that it can do a lot apart from keeping those sharp cutlery safe and tidy, but it does incorporate a nifty ledge on the otherwise unused side of the block for placing your cookbook, or for the 21st century, gadget-loving chef, a tablet such as an iPad. a seemingly unimportant detail, but for the technologically-reliance chef, this might meant a big thing. well, at least, with the Victorinox Knife Block with Tablet Stand you can dispense with a separate stand for your tablet, thereby minimizing the clutter in the kitchen. though we would hardly recommend this, or any stand for that matter, if you are going to whip up some traditional Chinese cuisine which can be rather oily-messy – unless you are toting a made for kitchen QOOD tablet or have one that’s wrapped like the ChefPad.

in any case, this seems like an obvious solution if you really have to have a stand for a cookbook or tablet while you conjure up a gourmet meal. it appears that there are two models available: one with concealed slots and another, with exposed concealed slots. whichever you choose, they all come with a swivel base and available in either light or dark wood built. we are not sure about the pricing for the concealed slots model, but the exposed slots model with 18-slots is going for $49.95 over at CHEFS. 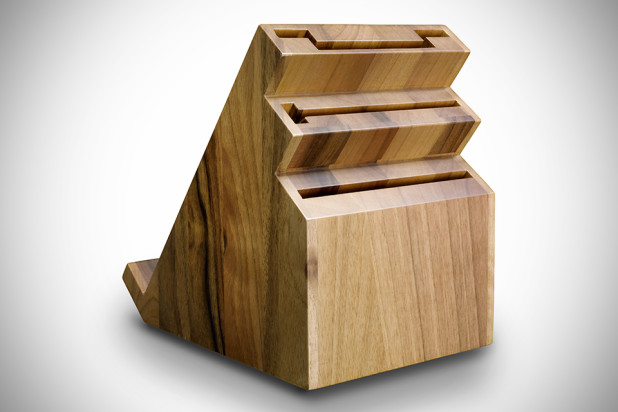