The things that madcap British garage inventor, Colin Furze, built certainly are ridiculous enough to quality them a place on the Guinness World Records and he certainly got recognized for some of the works, including the largest bonfire (2006), the longest motorcycle (2008), the fastest speed on a mobility scooter (2010), the fastest pram (2012), and now, he can add world’s fastest bumper car to his growing accolades. The BBC Worldwide sponsored bumper car, AKA dodgem, has made the run with Top Gear’s The Stig behind the wheel (or should we say, handlebar?) and in the process, setting the record of the world’s fastest bumper car. 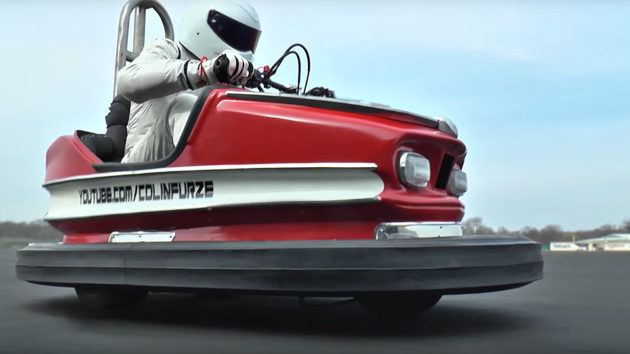 The record was corroborated by Guinness World Records who were there to witness the run. The run saw The Stig taking the custom bumper car, which is powered by a 100BHP 600cc 4-cylinder motor from a Honda sport bike, to an astounding speed of 100.336 miles an hour (161.475 km/h!). And that, folks, is definitely a knee-weakening speed for a thing this tiny and has only three wheels. Man, this is surely a bumper car that won’t get bumped.

Keep going for the video of the record being set.

P.S. We understand the record was awarded to Colin Furze and The Stig. So, it is a joint thing? Well, it must be, right? Since it is sponsored by BBC Worldwide?