remember the world’s biggest speaker, the Wall of Sound aka WOS? well, that title has been toppled, snagged, and trampled by… its successor the Wall of Sound 2.0 aka WOS 2.0. well, actually, it nearly had the title swept off if the iNuke Boom didn’t fade to the oblivion, but anyways, the WOS 2.0 is now officially the biggest iPhone speaker ever, measuring 1.7 meters across, 1 meter tall and has a depth of 0.4 meter (roughly 5.6′ x 3.3′ x 1.3′) and it tips the scale at an insane 178 kilograms (392 lbs!). it is not just the physical dimensions that went up the chart, the second generation WOS has 64 percent more speakers and is, wait for this… 95 percent louder than its predecessor.

still maintaining the same handcrafted tradition, the WOS 2.0 has a whopping 44 speakers (16 more than the WOS 1.0) plus four mega powerful subwoofers, bolstered by tube amplifier, bestowing the audio output with graceful mids and crystal clear highs with a touch of warm tones, and of course, it has a hearing-impairing loudness of 130DB, a noise level similar to those of a F-15 fighter with afterburners kicked in at 100 meters (328 feet). it is capable of outputting a mind-boggling 8,000 watts at full throttle, which is enough to fill an area the size of football field, and this also means this gargantuan speaker poses a serious threat to your neighbors unless you happen to stay in a remote dwelling like the Pioneer Moon Ranch, and with the insane output, it is most definitely going to make a kill on your electricity bill. don’t say we never warn you.

speaking of loudness, the Sweden-based BROTHERS is concern about your sound holes’ well being and has put in a place a small monkey head (about half the size of the iPhone) to warn you of “immediate risk of permanent hearing loss (!?)”. yes. we said ‘monkey head’ and as odd as it may sound, it will serve as a warning if you crank it up too loud. under normal volume, the eyes of the primate glows blue and will turn into golden (amber, i suppose) when playing very loud. however, extreme volume will kick them into the red zone, which means there is an imminent risk of damaging your hearing, permanently. if five minutes into the red alert and you still choose to ignore the ape’s warning (or you can’t hear anything anymore, or whatever), the monkey head will pop off, cutting the music, and hopefully, in time to save your hearing. the speaker will not function until the primate is returned to the speaker again. the warning system is a bit of oddity, but nevertheless functional. our only question is, “why monkey?”

the WOS 2.0 – Wall Of Sound 2.0 by Brothers is currently on a two-month long crowdfunding campaign, where you can score this badass speaker for $6,900 a heft. if you have more splurge, there’s a Lou Reed Edition going at $8,300. unfortunately, the one-and-only, 18 grand Iron Maiden Edition has been claimed. 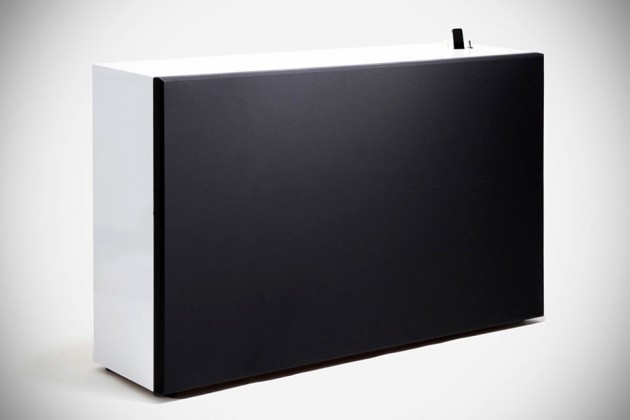