To this day, there have been countless DeLorean Time Machine collectibles, ranging from the life size vehicle to scaled models. However, none of them actually flies, much less hovers. Well, that’s until Kids Logic comes along and shove a real hovering DeLorean of 1/20 scale into our face. First appeared at the Ani-Com and Games Convention in Hong Kong this past Summer, the 1/20 Magnetic Floating DeLorean Time Machine works along the same principle of the Floating Iron Man we saw a few months ago, which means Mr. Fusion ain’t working the magic to power this flying car time machine; instead, it only works over a special powered magnetic pad. 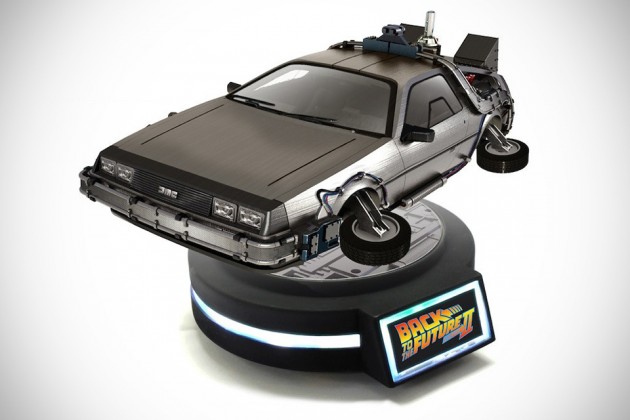 The magnetic pad sports a mirror finished surface, letting you view the underside of the floating DeLorean and it also boasts an integrated name plate that says the obvious “Back to the Future II” in its iconic branding. Surrounding the pad and the name plate are light up strips for the added sci-fi mood. The vehicle itself is modelled after the movie’s flying DeLorean, complete with light up electrical harness, plus various lighting effects. All told, there are over 10 LED light up features that will ensure this BTTF II collectible shines.

Other features include opening doors and movable wheels, interchangeable wheels to switch between flying and normal car modes, “flame effect” parts, and one additional non-magnetic display base. So where and when can you buy this? Well, this is the tricky issue. When it was announced back around mid of this year, it says pre-order is happening, but the last we check (a day before ‘future’ arrives), Kids Logic says “pre-order starts soon.”

Now, here’s the confusing part. At least one online retailer is taking pre-order at $195 a pop and we check in with one of Singapore’s e-tailer, the pre-order is already closed. So, we are not sure what’s going on. One thing for sure is, it will only be available Q3 of 2016. Anywho, we will be on the look out and if there’s any updates, we will be sure to post it here.