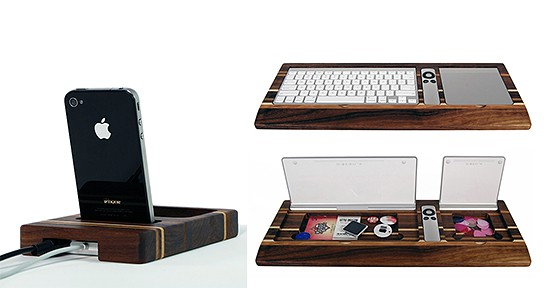 in the past, a good gentleman will have, on their desk, a tray of sort to organize their nitty gritty stuff such as their keys, clips et cetera. if you are those good gentlemen then you would want to do the same but with a little 21st century additions. Hekseskudd have exactly the right products for you: it has given yesteryear’s gentleman’s tray a 21st century twist such as a tray made out of wood (with a choice of Walnut or laminated wood) for integration with your iPhone/iPod dock to recharge your modern electronic gadgets along with recesses for your glasses, pens and lose keys, among the other things.
[ad#Google Adsense-text-468×60]

that’s not all, Hekseskudd has a slew of products to hold anything from Apple wireless keyboard alongside the magic track pad to Apple Remote to dual docking stations for charging of two iPhones. if you need just one dock, Hekseskudd has that too and it comes with a little recess for paperclips, flash drives or whatever you fancy. prices start from $69 for the single dock (dubbed the Drop Spot Dock) and runs up to $189 for the ‘Landing Pad with Drop Spot / Matched Set’. however, one thing to note is, what you are paying for is only the wooden product which does not include the Apple Universal Dock.