Airbus is relentless when it comes to “optimizing use of the available space” and it, apparently, goes beyond the passenger cabin – to the cargo hold area. Yup. That’s right. If Airbus have its way, by 2020, airlines will have passengers in the belly of the flying tin can too. But not to worry, it will nothing like fictional Jack’s third class cabin on Titanic. It will be a lot cosier and it certainly won’t be as budget, but how much more airlines will price it, remains to be seen. 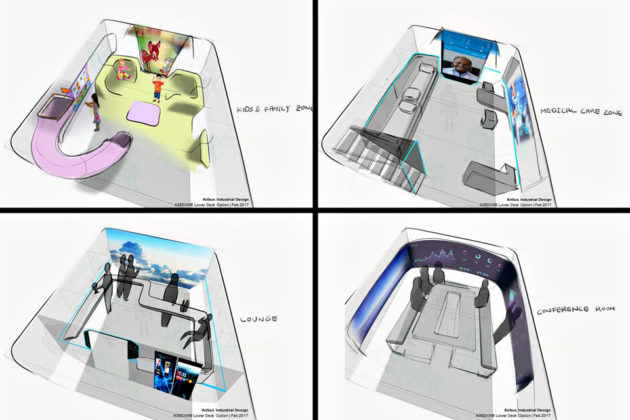 The change to the cargo hold is not permanent though. This human-usable space in the aircraft’s belly will not replace cargo space; instead, Airbus’ plan involves developing modules that can be plugged into the cargo compartment during a typical turnarounds, replacing cargo. Though it is not known if the cargo compartment can be a mix of modules for human cargo and actual cargo. Everything pertaining to the cargo floor and cargo loading system will remain the same; the passenger module will fit on the floor like ULDs do and presumably, loaded in the same way.

In case you are wondering, this is where the lower deck is (red outlined area):

Here’s a cross section of an A300 cargo hold (red outlined area):

Anywho, the modules will include sleeping berths (that looks like sleep berth on commercial ships, but roomier), conference rooms, work space, bars and lounges, a play area for children and reportedly, even a sick bay with doctors available through teleconference. Oh, wow. Are they sure they are not talking about a cruise ship? I mean, seriously, what’s next? A casino? But really, a big-ass airship will be a better fit as a cruise liner of the air.

Airbus will first offer this crazy idea for its A330 aircrafts, but there is plan to include A350 XWB too. In the official press release, Airbus said the idea behind this lower deck sleeper area is to “improve passengers’ experience while enabling airlines to differentiate.” No mention if this is a move to improve the aircraft maker’s bottomline and/or a move to help airlines maximize profitability, but of course, they wouldn’t declare that openly, would they. That is kind of understood anyways.

Whatever the case is, I am not going to deny that the prospect of having more areas to roam around while 30,000 feet in the air is rather intriguing. That being said, we are most definitely eagerly awaiting for its arrival and see how it pans out in real life markets.