2011 marked the year Bell & Ross successfully transited from the air to the ground with a special collab with Shaw Harley-Davidson Speed & Custom. three years on, the French luxury watch company is reaffirming their foothold on the ground with the radical and retro-licious B-Rocket Concept Bike. our initial thoughts when we first lay eyes on the B-Rocket were, ‘did Bell & Ross dig something out from its archive to show us?’ nope. apparently not. part airplane, part motorcycle, this two-wheeler is the latest collaboration with Shaw Harley-Davidson featuring unique blend of aerodynamic lines that evoke the experimental aviation of the 60s and the speed bikes that are destined to set records on salt lake at Bonneville. 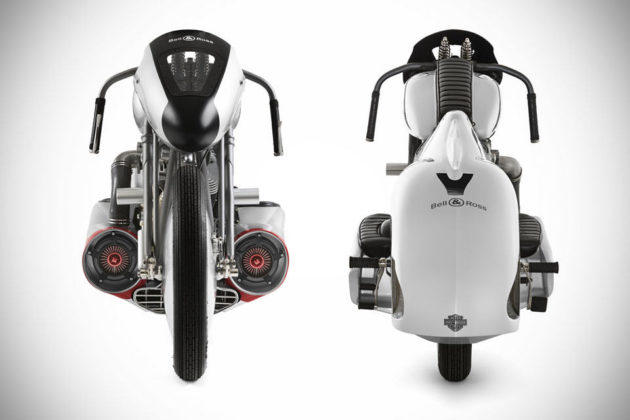 described as an airplane-motorcycle, the association of the B-Rocket concept bike with an airplane is unmistakable, starting from the jet-like conical nose to the fin and to the turbine propulsion system. in fact, it is so aircraft-like that you’d be forgiven for mistaking it for a real experimentation aircraft of the 60s which would have a deserving place in the National Air and Space Museum. the B-Rocket concept bike is a world apart from the first collab, where a more ‘down-to-earth’ approach was employed on the custom Softail. also, instead of simply sticking a B&R watch into the fuel tank like the former example did, Bell & Ross goes all the way out to design a tachometer which is incorporated into the front fairing to keep the rider informed of his machine’s performance.

as always, attention to detail is astounding; the canopy and the tachometer combine extreme legibility with the rapid display of information regarding speed when the rider is riding in a low, hugging position, peering through a glass windscreen as he/she is tearing down down the strip. powering this Harley-Davidson Softail Blackline FXS-based ride is a 1,584cc V-twin engine, mated to a six-speed transmission that enables a top speed of 200 km/h (124 mph). other noteworthy features include 21-inch wheels wrapped in Avon Speedmaster rubbers and Mooneyes wheel covers, Paughco forks, modified Harley-Davidson rocker arm and oil tank, Alf Hagon fairing, inboard disc brake system, and custom exhaust system, leather seat, chest pad, handlebars and rear bodywork – all by Shaw Speed & Cusstom. obviously, this concept bike is not for anyone’s taking, which is a kind of cruel but as a consolation, we have a few more official images to round.

NOW READ  The Batcycle in Matt Reeves’ The Batman: A Hint Of The Movie's Overall Setup