you heard about powered skateboards? they are awesome, but there’s one thing that still stands between you and the board, and that’s the required remote that controls the forward speed and stopping action. remote wired or not, can pose some inconvenience, like what if the remote falls out of your hand? not pretty, we must say. however, the second-generation Board of Awesomeness, a gesture control skateboard, developed by Chaotic Moon Studios for Toyota is designed to overcome this by giving you gesture control over the skateboard. based on Chaotic Moon’s first BOA (no relation to the ferocious reptile, btw), this second iteration features a more powerful 800 watt electric motor, matched up to a 36V power supply for motion, while a “Phidget” interface module, Microsoft Kinect, a custom software and a Windows tablet sees to the gesture input.

it is an all-terrain skateboard and hence, it is naturally blessed with huge, grippy all-terrain tires and everything that can be polished is being given the polished treatment, wrapping up with custom Toyota’s branding to give the BOA “a Toyota feel.” this second-gen gesture control skateboard is safer – thanks to the faster processing and improved connectivity which allows gestures from the rider to be quickly translated to action. though elbow and knee pads, and helmet are still recommended. basically, what the Board of Awesomeness Gesture Control Skateboard does is, it allows the rider to control the movement, such as speeding up or slowing down by the way of gestures, which is the coolest thing to ever happen to a powered skateboard. click past the jump for a video of the Board of even Awersomer-ness in action. 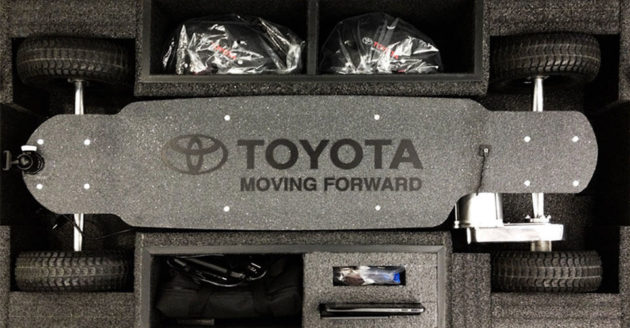