you know those aboveground inflatable pools? how are those looking too you? too unmanly, perhaps? then may we suggest you to check out the CAMOPOOL Inflatable Pool and as the product name implies, it is the inflatable pool you know, in camouflage. man, we can’t believe nobody thought of camo-ing this until now. basically, instead of the usual blue items that are sometime adorned with cartoon characters such as Nemo and stuff, the CAMOPOOL Inflatable Pool comes in an ever man-friendly camo pattern. it has a triple ring design for better side wall support and the skin is of heavy duty 0.5mm PVC material that is said to be two times stronger than standard inflatable pools.

being an adult pool or more specifically, a man pool, it does come with four thoughtful cup holders, so you can have a cold one right next to you while you are lounging out. other features include double valve intake/free-flow exhaust valve, water drainage plug (obviously, but you will surprised some has none), and it holds about 477 gallons (1.8 cubic meter) of water at 75% capacity. so there you have it, an aboveground inflatable pool that a man could call his own. now all that is left is a camo-clad man-slide to complete the grown-up-reliving-the-childhood-days setup. you can get yours from RocketHub for $95. there is also pet pool too, in the same glorious camouflage print, going for $80. the good thing is, they ship internationally too, though the shipping might cost a fair bit. still, a man has to do what a man has to do, plus you don’t get to chance upon a pool in camouflage everyday, do you?

p.s. this probably not the best time to think about an outdoor, aboveground pool. we acknowledge that, but as always, it doesn’t hurt to know that it does exist and probably, snag one for next Summer. 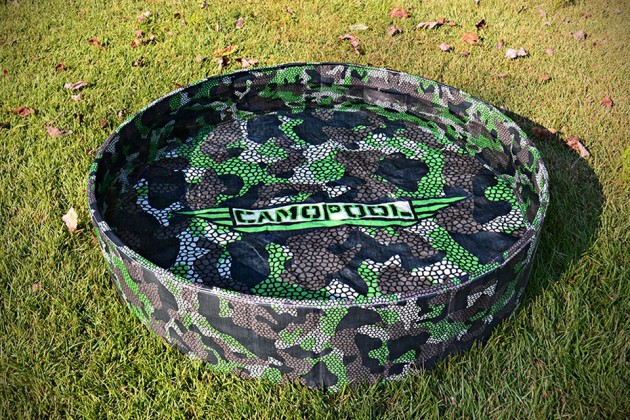