Seriously. Can someone point out what’s wrong with the creativity industry? In particular, the fashion design industry? Because I don’t get where the designers have gotten the creativity juice, or the lack thereof, from. First, consumers were hit up with clear knee jeans, followed by a pair of completely clear jeans. And oh, let’s not forget about the hilarious dirty work-saving, pre-muddied denim too. Just when you thought those are about as ridiculous as fashion sense can get, you realized there’s designer bag that apparently took inspiration from cheap black and blue bags commonly used in Asia and even more recently, one that looks like a 99 cents tote bag. 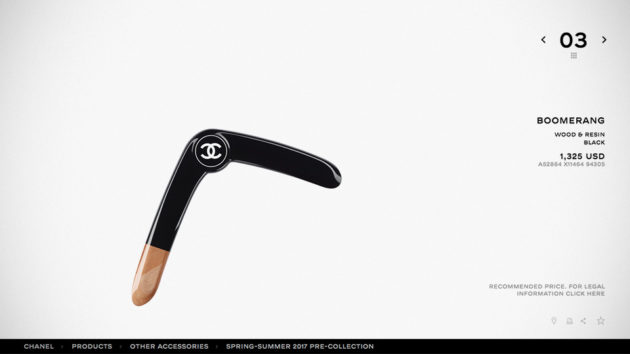 And it looks like it is not going to end anytime soon because we heard Chanel is selling boomerang too. Yup. You heard that loud and clear. The French high fashion house has taken cue from Australia indigenous people’s hunting tool and selling it for, wait for this… $1,325 a piece. Are you serious, Chanel? Selling the de facto symbol of indigenous people, slapped with your branding? Guess, you guys and possibly, the entire creativity industry, is experiencing a major design apocalypse.

Granted the boomerang in question here is not quite a fashion item, but hey, Chanel is arguably one of the biggest icon in the fashion industry and so, it is only fair to say whatever it turns out, is a representation of design and hence, this upmarket boomerang is a fashion symbol. Not quite the best product to put out there considering the plight of the indigenous people. Anyways, now you know. The fashion industry is probably in an apocalypse now.