Cosplay is about the effort a person puts in to the outfit. We love admiring the creativity of cosplayers. Sometime we admire them for the intricacy and attention to details. Sometimes we are amused by how accurate and true it is (like, you know, “gamer who has no real life” cosplay?) and sometimes, we love a parody of sort, such as this Thanos cosplay spotted at the recently concluded San Diego Comic-Con. Wait, that was a Thanos cosplay? Yes, it is, my friends, but it was Thanos from an alternate dimension – a Hispanic dimension, to be precise. 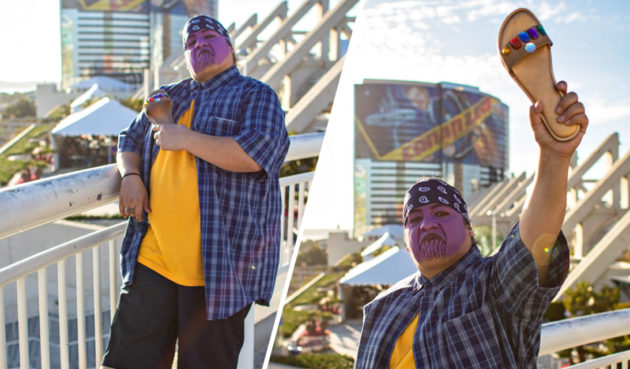 The person behind this cosplay is Tweeter user @battjuice and he called this version of Mad Titan, Cholo Thanos. Cholo Thanos is obviously may not be accurate depiction of the super villain, but it was sure a hit at the convention and since it was posted on The Nerd Lys and tweeted by LoLApex, it has totally went viral. Anyways, what is Thanos without the infamous Infinity Gauntlet, right? Well, this Cholo Thanos certainly have an Infinity, well, something. It is not the all-powerful space glove though. Instead, this alternate dimension Mad Titan has an Infinity Chancia.

Infinity what? Chancia. That’s the Spanish word for slipper. In fact, it is not just a word to describe any slipper; it is the word for slipper that is often used to refer to the slipper a mother or in some cases, grandmother, use to punish the young ones for doing something wrong. Now, you see the humor of this cosplay? It is absolutely hilarious!