weapons of any kind are all dangerous, but still, there’s no denying that anything that involves projectile is pretty alluring, especially to man. however, not all are inclined to pick up a weapon because of various reasons ranging from local laws, social stigma, risks et cetera. so the Crazy Combat Catapults seem like an awesome solution. firstly, they are not actually catapults off-the-rack… yet, so you probably can buy wherever you might be located without much restriction; secondly, they are made of cardboard and shoots a cardboard-made old wall telephone which makes both the ‘weapon’ and the ‘projectile’ relatively harmless; and lastly, it has an evergreen steampunk-esque look which makes it all the more attractive.

the kit consists of two DIY steampunk-style cardboard catapults and comes with one miniature replica of an old wall telephone (very steampunk-ish, naturally) that you use to launch at a host of steampunk-style cardboard targets such as a steam-powered dolphin, steam-powered horse with rider, and a man with trees growing out of his head – just to name a few. it comes with a book that provides you with step-by-step instruction for putting together the catapults, along with a historical look at catapults throughout time. the Crazy Combat Catapults is published by Parragon Books and is available now for just $9.95. seriously, this is one good (and rare) example of fun packaged with knowledge that doesn’t cost an arm or a leg.

NOW READ  Believe It Or Not, This Custom Electric Guitar Has A Concrete Body 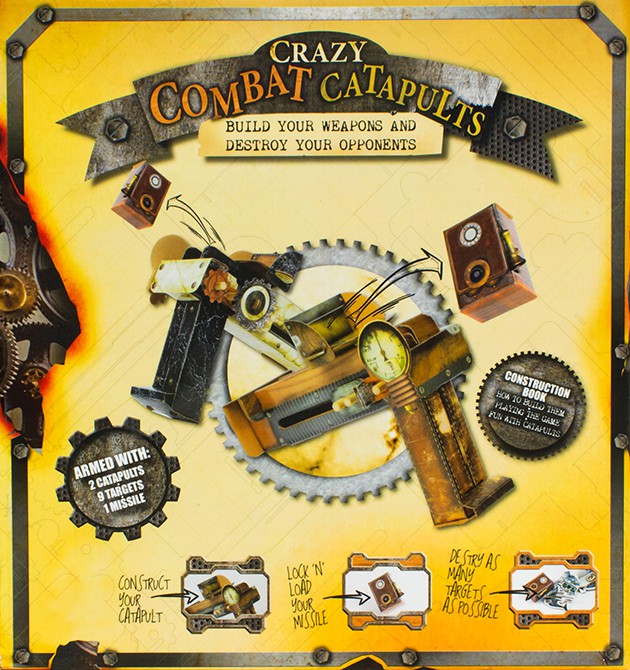