Remember the super cool, doodlable coffee/ping pong coffee table hybrid? What’s the use of it when you don’t a couple of paddles to go with it, right? So here’s a pair made by the same folks, Huzi Design, to finally put that table to good use and it comes complete with balls that are silence and uncrushable. Yes. Uncrushable, because losing make you mad and more often than not, the balls tend to get the beating, but these balls will be able to hold up regardless. And also, it is totally silence so you won’t intrude into anyone’s sound space if you and your mates decided to have a game in the middle of the night. Then again, being total silence kind of make it a more difficult game to play. No? If you know anything about table tennis, it is often the sound that preamps of its arrival and some says, the intensity of the shot coming at you. 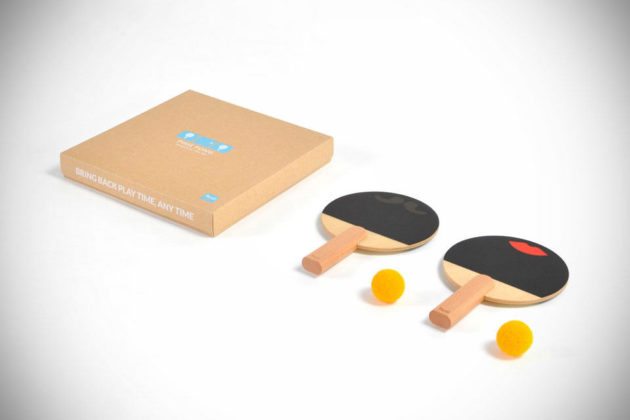 Anyways, we take it as a challenge and in any case if we get mad, at least the balls will be safe. As for the paddles, they are handsome little fellows handcrafted from premium beech wood and laminated wood for lightness, agility and of course, aesthetic. Finally, the paddles are given a moustache and red lips graphics for a whimsical touch. Note: the graphic won’t boost your performance though. The Ping Pong Paddles by Huzi Design can be yours to own for just $29 a set. Each comes with two paddles and two uncrushable balls. Wait, are we saying ‘balls’ too many times on this post?