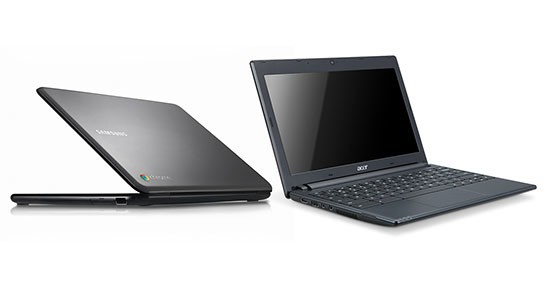 i wouldn’t say i am all keen about Google’s Chrome OS-based laptops but it is definitely something worth looking out for as long it will give Mac OS and Windows a run for their money. recently Google unveiled details on a couple of laptops that is set run on the much awaited Chrome OS and these laptops are lovingly dubbed as the ‘Chromebook’. i must admit, it does sound a little cool.

the first is Acer Chromebook sporting a netbook-ish 11.5-inch display. the Acer machine is powered by Intel Atom N570 dual core CPU and featuring a 16 GB SDD for storage, and has a reported 6.5 hours of battery life. looking at the brief, it is easy to think it as a netbook rather than a full fledge laptop. however, regardless of what ‘book’ it is, it still very much depend on how well the Chrome OS will perform. perhaps those who were lucky enough to get their hands on the Google Chrome Cr-48 test machine will be a better judge. other features include twin USB ports, webcam as well as HDMI out. of course, the highlight for Chrome OS would be its ‘instant-web’ features which Google touted a mere 8 seconds to boot up.

the second Chromebook in line is the Samsung Series 5 which has a slightly larger display at 12.1-inches. Samsung Series 5 Chromebook is powered by Intel Atom N570 dual core processor with a clock speed of 1.66 GHz running alongside with 16GB SSD for storage and a claimed battery life of 8.5 hours. it will also sport a SDXC card slot, webcam and also features ChromeOS’s highlight, ‘instant-web’. similarly, the specs tells us that this machine falls into the netbook category. however, we are incline to think Google is setting a new product category on its own, which is obviously called the Chromebook.

built-in dual band WiFi comes as a standard for both laptop while buyers will have an option of worldwide 3G connectivity. the Acer Chromebook weighs just 2.95 lbs (1.34 kg) and is expected to retail for $349 for the base model. the Samsung has a little more weight to it, weighing in at 3.26 lbs (1.48 kg) and will cost $429 for the WiFi only version and $499 for the model with 3G. personally, i can’t wait to give it a go but i thought the price is kind of on the high side for a specs as such. nevertheless, if you have been waiting for Chrome OS, your wait is almost over. Chromebook is expected to be available come June 15 from Amazon and Best Buy.