In what could be the weirdest collaboration in the mobile phone industry is this striking red smartphone from Chinese telecommunication equipment maker Huawei. While Huawei fans could see that this in fact the Enjoy 7 Plus, the red speaks of something else. Something… how should we say? Finger lickin’ good? Yep. What you see here is KFC phone by Huawei. And yes. Colonel Sanders now has a phone under his name, well, kind of. Announced by KFC China on its Weibo page (China’s Twitter equivalent). The Huawei Enjoy 7 Plus Special Edition Commemorative KFC Phone was announced to mark the American fast food chain 30 years of presence in China. 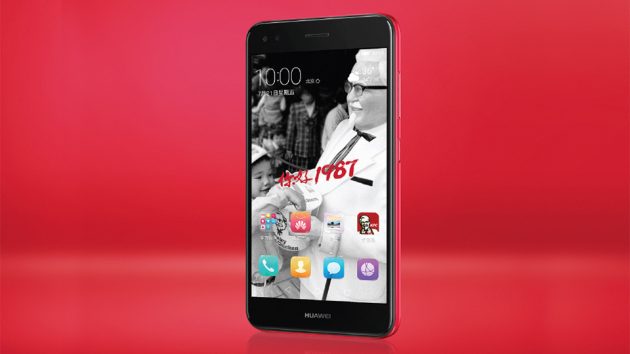 Wow. We didn’t even realized KFC have been in China for that long. Apparently, not only KFC have been there three-decade long, it is extremely well liked by the population which we attribute in part to China’s KFC is extremely innovative marketing strategies (like having your nails smelling like fried chicken…). Anyways, apart from the obvious KFC’s signature red colorway and the laser engraved KFC branding alongside Huawei’s, the phone will come preloaded with the Chinese KFC app (“KFC Super app”) which can be used to pay for your KFC purchase. Also included in the app is a complimentary 10,000K dollars, as well as a thing call “k-music” that will let you pick the music you fancy and hear it through the speakers at one of the KFC restaurants, in China, naturally. 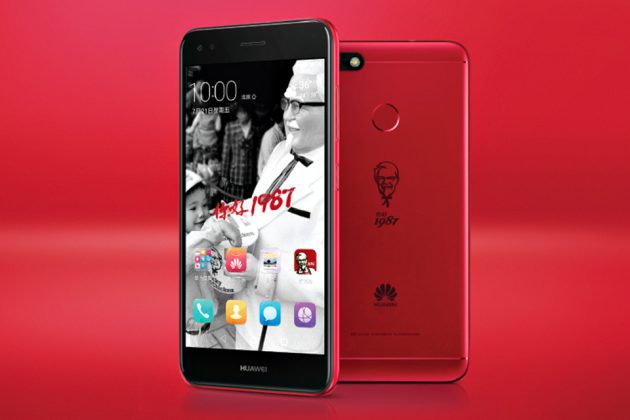 Apart from the aforementioned KFC-centric touches, the device is identical the stock Enjoy 7 Plus, which means you will be expecting specs like 5.5-inch 720p display, a Snapdragon 435 chip packing a octacore processor (4x Cortex A53 1.4 GHz + 4x Cortex A53 1.1 GHz) backed by 3 GB of RAM and 32 GB of onboard storage. Imaging, if you care to know, comes in the form of a 12 MP main camera and a 8MP front-facing item, and there’s of course, the modern day requisite feature: fingerprint sensor which can be found around the back of the device. The usual connectivity and sensors applies here, so we shan’t regurgitate them here.

The Huawei Enjoy 7 Plus Special Edition Commemorative KFC Phone is a China-only device which, in case you are a huge KFC fan, you can only drool over it from thousand of miles away. However, if you are in and around China, you can pick up the device from Alibaba’s Tmall for a modest sum of 1,099 RMB (about US$162). But be warned. Only 5,000 units are made available and if the love for KFC in China is proven true, it may not be on the shelves for long – especially with such an affordable price tag and a bonus 50 RMB voucher to boot. Then again, we could be wrong. Maybe phone and fried chicken don’t mix. I don’t know. Keep ahead for the launch video.