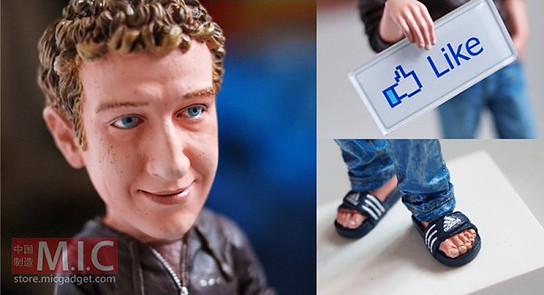 first it was the CEO of the pineapple company being immortalized as an action figure, but then things got a little ‘touchy’ and it was removed, much to the disappointment of all pineapple fans. now the inventor of ‘poking’ is the newest victim of this unofficial immortalization. this is no Madame Tussauds’ wax figure, but this 7-inch action figure, sporting the trademark casual brown sweat shirt, worn jeans and a pair of Adidas sandals, does resembles the poking inventor, albeit sporting bigger head. though, not as stunning as the pineapple CEO action figure, which is still our all time favorite (the ninja version, included).
[ad#Google Adsense-text-468×60]

as with all the previous action figures from MIC, Mr. Poking comes with a few speech bubbles to let Zuck has a say to your bidding. well, sort of. oh, and this little guy also comes bundle with two tiny acrylic plate that says ‘Poke’ and ‘Like’ which most of us are familiar with and the action figure stands on a rectangular platform with the famous FB icon next to it. how cool is that? fans of FB can now have a piece of the world’s youngest billionaire and Time’s Person of the Year (2010), right on your desktop. the “Poking Inventor” Action Figure retails for $69.90 and is available via MIC store in limited quantity. ‘ultra-super-duper’ fans will be disappointed to know that there’s an order limit of one-per-customer.