A group of humans’ behavior will change in the presence of, say, bob cats. That’s obvious. The same applies to marine creatures when there is a presence of cold, hard observation equipment like Remotely Operated Vehicle (ROV) or Unmanned Underwater Vehicle (UUV). The odd-one-out ROV will never assimilate with the fishes. As such, humans will never get true to marine life data and that’s not to mention the inflexibility of typical ROVs to access tight caverns. This is where MIT Computer Science & Artificial Intelligence Lab (MIT CSAIL) robotic fish, SoFi, comes in. 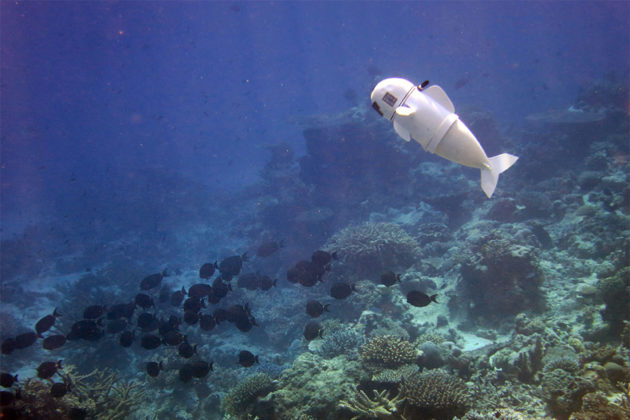 SoFi is the new era of robotic development. Instead of the usual hard materials, it has a malleable design and leverages on biomimicry that will, hopefully, enable it to integrate with the marine life and therefore, gathering valuable data that scientists and researches have failed to collect with conventional ROVs. SoFi is convincingly enough to pass off as a fish not only just by the form it possesses, but by how it swims; it flicks its tail like real fishes do. While flapping the tail to propel itself is not new (it even exists in toys), it is how the tail was driven that makes SoFi somewhat of a robotic marvel.

Now, you would probably assume a motor is responsible for the tail movement, but it is not. It is a little more sophisticated than geared motor. It still has a motor, but this motor does not drive the tail directly; it pumps water into a pair of balloon-like chambers that act like pistons in an engine located in the fish’s tail. When one chamber expands (by the virtue of water filling it), it flexes the tail to one side and when the water is transferred to the opposite chamber, the tail goes in the other direction, thus creating a side-to-side motion of a real fish.

In addition, the speed of swim can be regulated by regulating the water flow. Pitch is controlled by the side fins and vertical position is made possible by an adjustable weight compartment and a “buoyancy control unit,” MIT CSAIL said. SoFi maybe a soft robotic fish, but it is not 100 percent ’soft’; only the back half of the fish is made of silicone rubber and flexible plastic. The head is 3D printed and filled with baby oil to prevent water sipping in and also to protect the head from pressure changes when SoFi changes depth.

At this point, SoFi only does depth up to what a beginner diver would do and it is, for now, controlled by a waterproofed Super Nintendo game controller via a custom acoustic communications system. So, yeah. SoFi can pretty much maneuver freely without tether. The next time would be enabling it to explore greater depths without a human controller tagging close behind. The team also hope to bump up the speed, tweak the design of the body and tail, and also explore the use of the onboard camera to enable SoFi to automatically follow real fish.

So far, SoFi has done test dives in the Rainbow Reef in Fiji where it had gone more than 50 feet deep for up to 40 minutes as it handled the currents while capturing high-res stills and videos with its fisheye lens camera. I can’t help it but to wonder out loud. Will SoFi get mistakenly chomped by a killer whale or Great White? I mean, it is quite convincing, isn’t it? Just a thought there. Good thing that these guys are building more SoFis. Skip ahead for a video of SoFi in action.