Grown ups often talked about zombie apocalypse and how best to prepare ourselves. The truth is we probably won’t see such a calamity in our lifetime, but we can’t say the same for the generation that follows. This is why the Nerf Zombie Strike Brainsaw Blaster could be a sound toy weapon for kids to work on their zombie slaying skills while they are still young. You know what they say about learning? It is always wise to start from young and the Nerf Zombie Strike Brainsaw Blaster offers your young ones the right tool to do just that. Aside from the usual foam dart shooting feature, this particular blaster comes equipped with a foam chainsaw that actually works. Well, works as in it rotates like a chainsaw should; not ‘works’ to cut down anything. 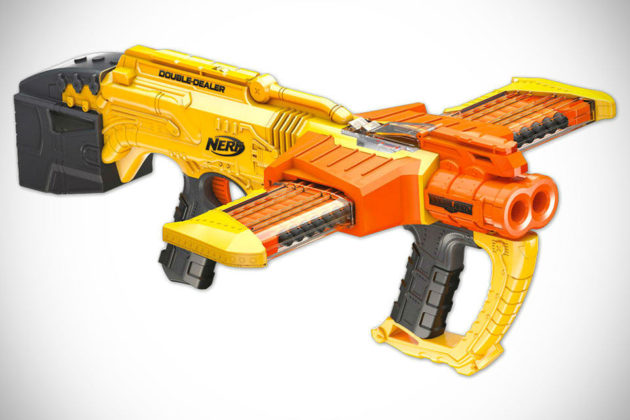 The chainsaw, or in this case a brainsaw, is obviously for close-quarter combat and long range offensive is still taken care by the good’ol foam darts found on either side of the blaster – four on each side. Along with the chainsaw-equipped blaster, Nerf also unveiled a new Doomlands Double-Dealer Blaster that looks like a bad-ass crossbow with its dual magazine sticking out from either side. Each mag holds up to 12 darts and it has a twin-barrel setup that lets you put two darts downrange simultaneously. This is a toy, so we are not sure if putting out two darts at one go will make any impact difference than a single dart, but it does look pretty menacing enough.

Expect the aforementioned Nerf Blasters to surface at this year’s Toy Fair in New York. As for the price, the Nerf Zombie Strike Brainsaw Blaster and Doomlands Double-Dealer Blaster will retail for 30 and 40 bucks, respectively.