The fun of hobbyist drones are hampered by battery life. I mean, 10 minutes may seem like eternity if you don’t have clue about flying or don’t know what you are doing, but for the rest, 10 minutes may feel like a minute or two. That’s the problem the new Parrot Bebop 2 Drone solves. The new-generation Bebop doubles the flight time of its predecessor, offering up to 25 minutes of flight and it is also significantly faster, capable of zipping around at 37 miles an hour as you go about recording in 1080p with its 14MP fisheye-lens camera, stabilized by a software image processor. The thing about Bebop (this or the previous version) is, it has a fixed camera, which means it is more suited for first person flying then to do actual aerial-to-ground imaging. Though it does allow for virtual panning, executed through the video beamed to your mobile device over WiFi. 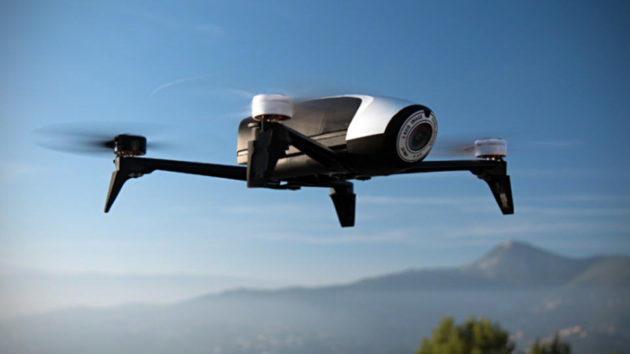 Location positioning, which the aircraft relies heavily, is also said to have improved – thanks to an updated GPS chipset and also, there’s a new safety feature that automatically shuts down all four motors when any one of them comes into contact with an obstacle, thus reducing the damage it will do to both the property (or living things), as well as the aircraft’s rotors. Control is by the way of an app on iOS or Android device, but like its predecessor, it also touts compatibility with the snazzy Skycontroller that gives you real flying sticks for controls, replete with a holder for your tablet for first-person flying and an integrated WiFi relay that will boast the Bebop range by an additional 2 km (1.2 miles). You can also choose to use the Skycontroller with a VR headset, as opposed to a tablet, for an even more immersive first-person flight experience.

Parrot Bebop 2 Drone is slated to hit the shelves on December 14, priced at $549.99 or $799.99 with the Parrot Skycontroller Black Edition. Clearly, it is not something that most people would buy for their kids and the choice of a fixed camera would probably not make it the serious aerial imaging enthusiast’s choice of imaging drone. In essence, Bepod 2 is kind of like sitting in between a prosumer rig and a toy. Or maybe it is just an expensive flying toy that records video? I don’t know. It sure sounds like a thing I would buy if I have the surplus cash to spare, you know, just for the sake of the Skycontroller that would help realize my dream of flying without actually paying six-figure sum for a real commercial pilot license. After all, I am not John Travolta.

via Engadget via Make