We have a lot of objects in our life that is at risk of lost, but instead waiting for that to happen, you can actually prevent lost from happening by tagging them with a handy Bluetooth tracker like Pebblebee Stone. But the Stone here from Seattle-based startup, Pebblebee, can not tag your fido to make sure he or she doesn’t dash for freedom while your attention is away, but it has a bunch of other functionalities. It has a customizable, double action button which you can set to make an emergency call, send out your current location, take a selfie, turn off the garage’s light and more and there is also an onboard thermometer that tells you the temperature of where the stone is currently, such as the car if you have it placed in our vehicle.

There is also a motion sensor baked into it, so if there is any unauthorized removal of the tagged stuff, you will be alerted in an instant. As said, the button is customizable to do almost anything under the sun, including a click or long click to send pre-formed texts like ‘on my way’ or ‘running late’ to a predetermined contact, which come in super handy if you happen to be behind the wheel. The Stone also supports Apple’s iBeacon communication which will automatically interacts with any BLE platform nearby, such as an iOS or Android device, letting the paired device know its proximity – all without the need for the app to be running. 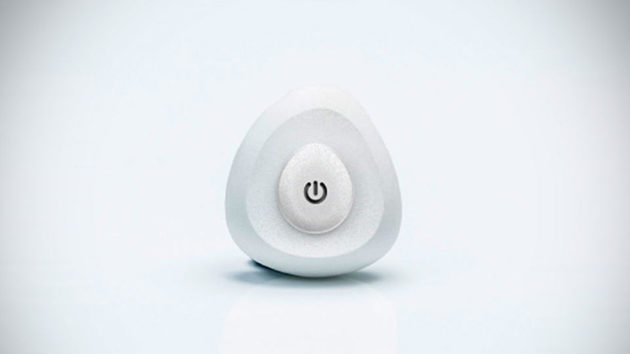 IFTTT is also a big part of the Stone, allowing it to do things based on If This Then That. Say for example, you at your driveway, hitting the button could lock your house doors or turn on or off all the outdoor lights. If you are in your bed, activating the button will turn off the bedroom lights. Basically, the possibility is endless, especially with IFTTT in the picture. Additionally, the Stone can record which action you want to happen, when and where. It logs the time of day, location, and ‘recipe’ used and “smartly” adjust to the actions you want throughout the day even without you doing anything. That said, how accurate and effective are its learning capability remains to be seen.

The hardware itself has a rugged ABS shell that’s waterproofed for life unexpected happenings and it is powered by a lone 3V lithium-ion CR2032 coin-cell battery for up to a year of use. And did we mention that it will be made in the USA? Yup. It is, which is a rare thing these days with gadgets. If you think Pebblebee Stone Bluetooth Tracker is the shortcut you need in life, you can pre-order it off Indiegogo for $25 and up. Available in two colorways: Glacier and Onyx. Accessories like sleeve and keyring cost extra, though, which you can get for an additional 10 bucks under the ‘Accessory Pack’ deal. Keep going for a very entertaining pitch video to learn more.